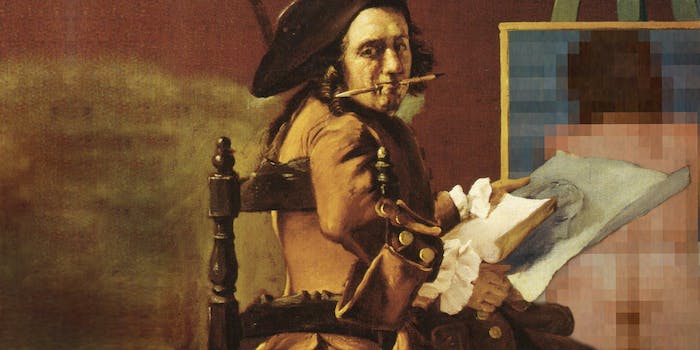 Yet another bizarre turn in saga that's getting more disturbing by the day.

The saga of #CelebGate, the uproar over the massive dump of illegally obtained celebrity nudes, has taken yet another bizarre turn. A Florida-based artist intends to exhibit some of the photos in an upcoming show.

The artist, known as XVALA, plans to blow up stolen images of Kate Upton and Jennifer Lawrence and print them “on canvas, life-size and unaltered,” according to a press release from Cory Allen Contemporary Art.

“We share out secrets with technology,” XVALA declared, “and when we do, our privacy becomes accessible to others.”

The show will be called No Delete, and the Celebgate photos will be displayed among his carefully curated “7 year collection of images found on Google of celebrities in their most vulnerable and private moments.”

XVALA is no stranger to appropriating intimate transgressions against women and showing them to the world as “art.” Back in 2011 he plastered leaked pictures of Scarlett Johansson across Los Angeles. He’s also used photos of Britney Spears in his work.

“In today’s culture, everybody wants to know everything about everybody,” the artist said in a statement. “An individuals privacy has become everyone else’s business. … It has become cash for cache.”

Jennifer Lawrence is among those threatening legal action against anyone hosting or sharing the photos—although the precise legality of the photos remains unclear.