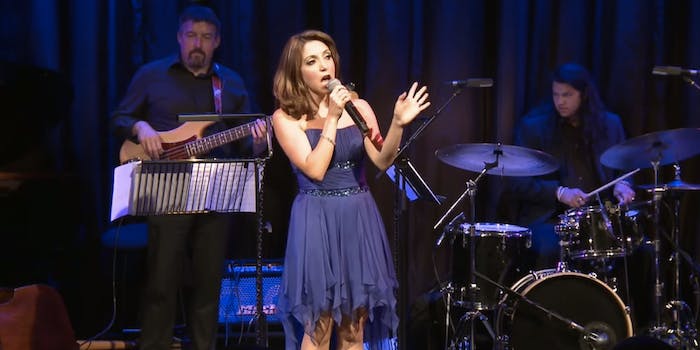 Christina Bianco, the female impressionist extraordinaire, is back with her take on the CeeLo classic.

Last we heard from Christina Bianco, female celebrity impressionist extraordinaire, she was covering “Total Eclipse of the Heart” and “Let It Go” from Frozen as, among other people, Idina Menzel, Demi Lovato, Adele, Celine Dion, and Britney Spears. Now, Bianco is back with her cover of CeeLo’s “Fuck You” (oops, sorry, I mean “Forget You”) at the Hippodrome in London, and she’s got a brand new arsenal of celebrity impressions under her belt.

In the video, Bianco urges the audience to take a shot when she launches into her next impression, before doing a pitch-perfect rendition of, among other artists, Celine Dion, Julie Andrews, Britney Spears, Alanis Morrisette, Kristin Chenoweth, and Gwen Stefani. And if you don’t lose it when she starts impersonating Penelope Cruz at the 2:20 mark, you’re probably not human.

Good luck with this drinking game, you guys. You’re gonna be wasted by the end of it.