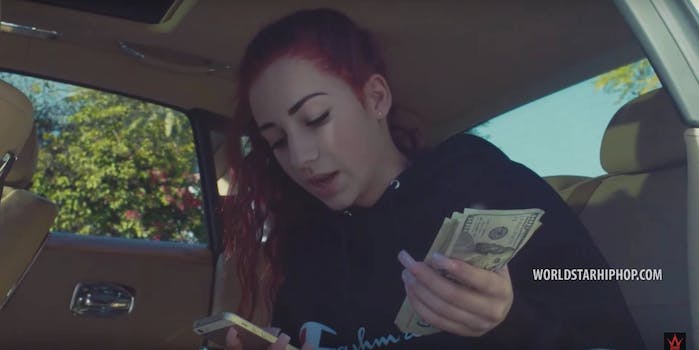 The meme teen shows out with rap star Kodak Black.

“Cash me ousside, how bow dah?” teen Danielle Peskowitz Bregoli must be making quite the pretty penny off her newfound fame. First with her new merchandise store, next with her anticipated second stint on The Dr. Phil Show airing today. And now the teen behind one of 2017’s biggest memes is even starring in a rap video, that premiered via WorldStarHipHop on Friday.

The video’s opening credits mention PizzaSlime, the production group behind Bregoli’s aforementioned merch. Bregoli even posted a snap taken during the video shoot to her Instagram four days prior to the video dropping, though it just appeared to be a promo for her Champion-styled hoodie which is brandished with her catchphrase.

Watch the full music video for Kodak Black’s “Everything 1K” featuring Bregoli below: