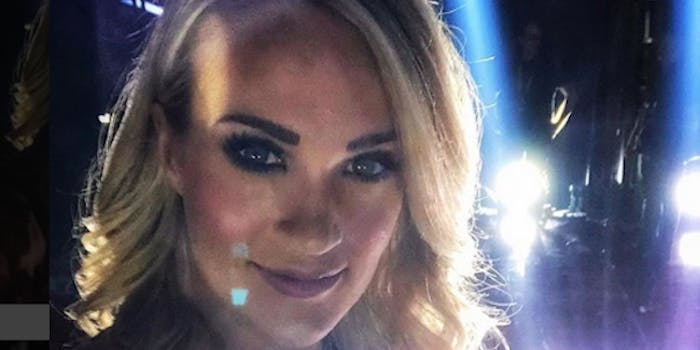 It was her first public appearance since the accident.

Carrie Underwood was worried fans might not recognize her after the facial surgery she received following an accident, but it turns out she can relax.

The singer took the stage for her first public performance Sunday at the Academy of Country Music Awards, and people on Twitter were having a hard time noticing any differences at all. The saga began back in November when Underwood apparently took a spill in her home and ended up breaking her wrist and needing 40 facial stitches. The country star chronicled her recovery process on Instagram for months, warning fans she might look “different” once her healing was done. She didn’t post any photos of her full face, which left fans squinting at partial pics—like this one of her wearing a ski mask, or this one of her behind a sticker—trying to pick up on any differences. Needless to say, Underwood’s fans were braced to support their fav through a dramatic reveal Sunday night during her first big performance, but it turns out the singer has made a near-full recovery. In other words: It’s hard to spot anything different about her face at all.

Viewers were confused, to say the least:

Wait. I think I see it. No, that’s a mole. Wait, THERE it is. Oops. That’s glitter. Adore you Carrie Underwood, but your face looks the same. You killed it tonight, but why all the secrecy? If you have a scar, show it off! Inspire young girls to be proud of the skin they’re in. pic.twitter.com/F5gAxwnj1g

Ok I’m not gonna lie. I was inspecting Carrie Underwood looking for the slightest trace of a scar — and just nothin’ 😂. I mean. Great! But… ummmm???

Me looking for that Carrie Underwood scar #ACMs pic.twitter.com/IVhl1Ve3o3

Really?!? @ACMawards we're giving Carrie underwood a standing ovation for coming back after having stitches in her face and looking -exactly the same- after making a huge ridiculous deal about it? #wayyytoovain

I realize that everyone reacts to events in their lives differently, but Jesus Christ Carrie Underwood, some ppl are actually disfigured in accidents, you were not. Time to work on yourself if a scar like that literally makes you afraid to show your face.

A source told People that Underwood had been “terrified” about people noticing her scars, even opting to skip the red carpet at the event in order to avoid talking about it.

Hopefully, some of that anxiety has lifted now that she’s made her debut.