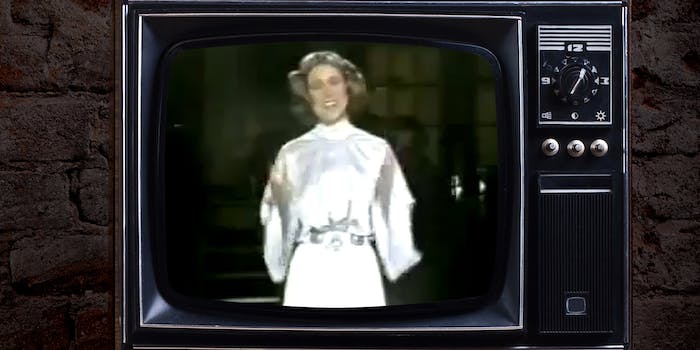 Her comedic side really shines.

Fans are taking a deep dive into decades of Carrie Fisher’s work after her death Tuesday, and while Star Wars, her memoirs and novels, and her one-woman show Wishful Drinking are on top of many lists, her comedic turn on Saturday Night Live is well worth a revisit.

Fisher only hosted SNL once, on Nov. 18, 1978—about 18 months after A New Hope’s release turned her into a household name—with musical guest the Blues Brothers, with whom she would later star in a movie. And it was Princess Leia she embraced as she walked out onto the main stage decked out in Leia’s famous Star Wars costume. She even had a Bantha joke fresh from Obi-Wan Kenobi.

After the monologue, Fisher—still donning Leia’s trademark buns—is transported to a cheesy ’50s teen beach movie complete with a fitting costume change and a musical ode to Obi-Wan Kenobi. And if anyone can handle a skeevy Bill Murray character, it’s Leia (and Fisher).

While it’s not one of SNL’s most famous episodes, it’s certainly gotten some love from fans over the years—even before Fisher’s death.

The Carrie Fisher ep of SNL is crazy. She and Bill Murray make out on a beach, then they all sing "Obi-Wan Kenobi!" pic.twitter.com/hEdKWRTlAv

You can watch Fisher’s full SNL episode with a Hulu or Seeso subscription or purchase it through Amazon Video for $1.99. A full transcript of the episode is also available.