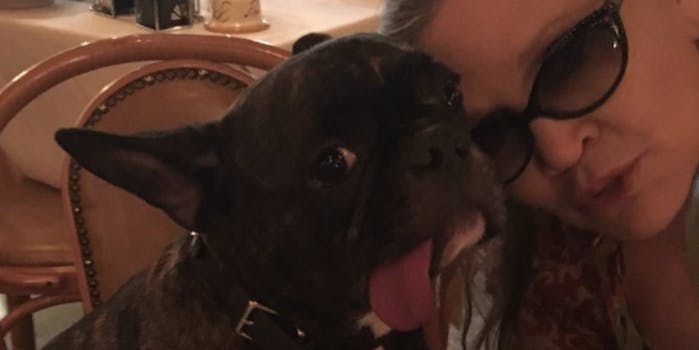 I'm not crying, YOU'RE crying.

The world lost a tremendous figure when Carrie Fisher passed away this morning after suffering a heart attack late last week. Fans and celebrities alike instantly turned to social media to express their shock and despair over the fallen princess.

But if you think you and your friends are taking the news hard, consider her grieving French bulldog, Gary. Thanks to his status as a service animal to help Fisher with her bipolar disorder, Gary has been at her side at awards shows, filming, and throughout her latest book tour.

After her cardiac arrest on the plane on Friday, he posted this picture:

And he wished her a speedy recovery with this cute Christmas wish:

All I want for Christmas is mommy' lap. Oh a big dog bone covered with bacon.

Saddest tweets to tweet. Mommy is gone. I love you @carrieffisher

A week ago, his Instagram account posted this photo of them napping together on the set of Catastrophe, though People reports he was also by her side in the hospital.

Dear Billie, I like a bacon flavor everything. https://t.co/cxeRWQpgBi