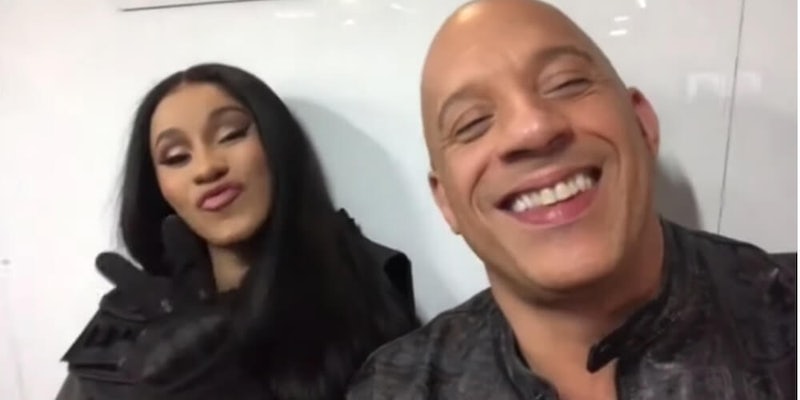 'I think this is gonna be the best one.'

Cardi B is ready for her close-up.

The Bronx-born stripper turned rapper has successfully shifted into acting. Cardi was on the set of Fast and Furious 9, according to actor/Fast producer Vin Diesel’s Instagram. It appears Cardi has been cast in the latest installation of the profitable and popular Fast franchise.

“Day 86 here on the set of Fast 9,” he revealed in an Instagram video while sitting alongside Cardi. “I know I’m exhausted … We all gave every single thing we could for this movie. Put it all on the table.”

Cardi B’s acting’s career is thriving! First it was Hustlers and now the rapper is set to join the Fast and Furious family! #upwith6 pic.twitter.com/VaacCqdtEF

Earlier this month on Ellen, the rapper told host Ellen DeGeneres that she was completing another film. However, she complained about the arduous filmmaking process during Hustlers.

“I couldn’t believe I was on set for 16 hours,” Cardi said. “It’s like, ‘Is this what actors and actresses gotta go through?'”

“Artists, we have long days but it’s just full of excitement. We move around, we doin’ something,” Cardi explained. “[Acting], you like, you gotta wait on the trailer until it’s your turn. You gotta do the same scene 20 times.”

The latest installment of the franchise currently opens in theatres on May 22, 2020.