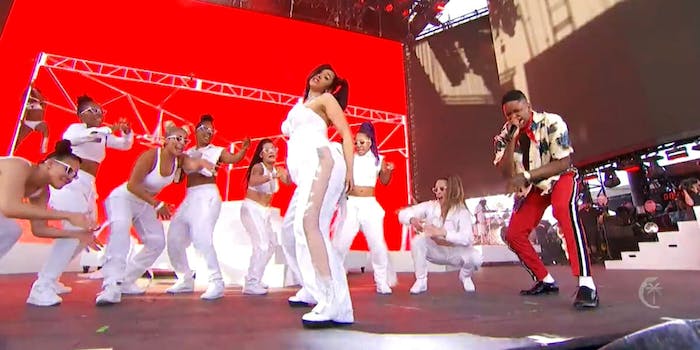 Cardi B brought her baby bump, twerking skills to Coachella

'I’m running out of breath.'

Cardi B made her debut at Coachella on Sunday evening, just one week after dropping her already gold-certified album Invasion of Privacy and debuting her baby bump on Saturday Night Live.

The Bronx-born rapper made it clear that she doesn’t plan to let her pregnancy slow her down onstage during her set—the stage production alone reportedly cost $300,000—and delivered a seamless, star-studded performance that showed off her twerking skills.

Fans took note and many made jokes on Twitter while talking about how impressive Cardi’s performance was.

Cardi B fresh to the game and has more breath control than some of your favorite seasoned rappers.

My girl @iamcardib out here performing a whole ass album, pregnant and unbothered. Meanwhile, I can’t walk up the stairs to my apt without being like #Coachella pic.twitter.com/GnJpjOgUU2

Yo. Shoutout to working moms. pic.twitter.com/WRIILJvdb6

Beyoncé gets pregnant before Coachella: “I’ll just perform next year”

Cardi B gets pregnant before Coachella: pic.twitter.com/aWK8dyaMZv

Cardi B backstage after she finished performing. pic.twitter.com/n0JrYLZWdL

Aside from her dancing skills, footage from Coachella shows that Cardi made plenty of jokes about her pregnancy throughout the evening, as well.

“I’m running out of breath,” Cardi joked, right before bringing G-Eazy onstage. “You know my pregnant ass. I need some friends to help me out. Give it up for my friend G-Eazy.”

And after she and YG performed “She Bad,” Cardi said, “And that’s how I got pregnant, y’all. Just like that.”

Aside from G-Eazy and YG, Cardi also brought out Kehlani, Chance the Rapper, and 21 Savage—all were collaborators on her new album.