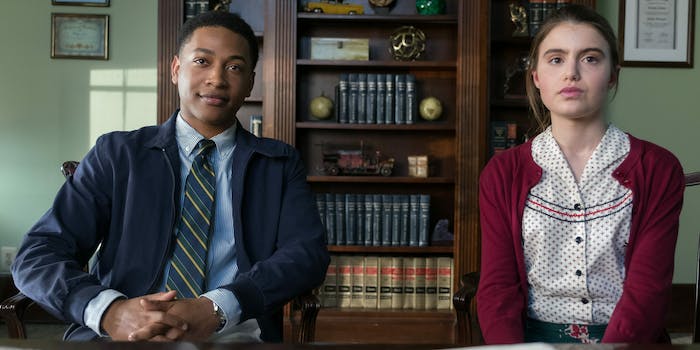 Netflix finally made a high school comedy about the debate team

The star-studded 'Candy Jar' is earnest as hell.

In high school, I spent one year on the debate team. I don’t say that to brag, because I did not fare well in competitions. The nuts and bolts of the actual debates were a chore. Nobody sounds sincere because they’re all trying to cram in as many facts as possible. It’s like listening to someone scream a Wikipedia page at you. Which brings me to Netflix’s Candy Jar. High school debate is a major factor in the movie, and much like my debate skills, Candy Jar plays things too safe to make a strong case for itself.

Candy Jar is about the intense rivalry between two debate champions, Lona (Sami Gayle) and Bennett (Jacob Latimore). They are lifelong rivals who can’t stand each other… for no good reason. Their moms, Amy (Christina Hendricks) and Julia (Uzo Aduba), were high school rivals, and the women passed that along to their children. The rivalry between Lona and Bennett never feels real. It’s like watching two puppies compete for attention. The lack of tension in their relationship makes the machinations of the characters transparent. By the end of their first scene, you already know where they’ll be by the end of the film.

The contrived foundation of the Lona-Bennett dynamic threatens to drag the film down. Gayle and Latimore have enough chemistry to carry the film until the story picks up steam in its second half. The movie sinks or swims on their shoulders. The adults in the movie are mostly cardboard characters elevated by strong actors, but only Helen Hunt’s counselor Ms. Kathy makes an impact. Aduba and Hendricks sell their scenes when called upon, but they aren’t given much to do. And the less said about Mr. Johnson (Paul Tigue), the better. Mr. Johnson is the requisite wacky teacher. He speaks primarily in movie quotes and it’s eye-rolling.

Candy Jar is ultimately hamstrung by its script, by Chad Klitzman, which lacks wit and anything close to a surprise. The story is predictable at every turn and occasionally elevated by the cast. It’s not bad, it just lacks a spark. That said, there are a couple of moments that stand out, particularly in the climactic debate. When Klitzman and director Ben Shelton aim for an emotional moment, they hit the mark more often than not. “Candy” turns out to be the most apropos way to describe Candy Jar. It’s reliably sweet and empty, a fine choice for anyone looking for a light option.