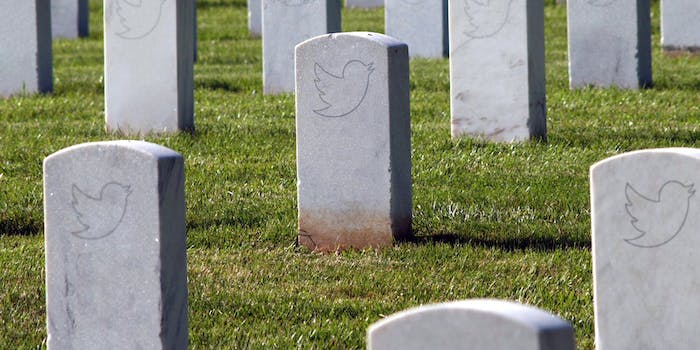 Splitsider takes us on a tour of the digital graveyard.

Ever wonder what happens to the network-run social media accounts of your least-favorite TV shows after they face cancelation? While many Twitter or Tumblr accounts are purged of content and recyled into the accounts of new shows, they are just as often left abandoned and unupdated by the network social team. Splitsider took a hilarious look at the social media accounts of various canceled comedies and the legacies they leave behind after the series leave the airwaves.

Our favorite? The sad existence of Go On‘s social media presence. The show, a Matthew Perry vehicle on NBC about grief counseling, was actually not too bad, but as Splitsider points out the Twitter is “a repository of context-free quotes from the show” while its Facebook fan page remains active with pleas for the show to return. A pretty depressing relic to leave languishing on the Internet.

“This is PICTURES of food!” #GoOn

Recent shows aren’t the only ones with social media graveyards. Super-popular programs of years pre-Twitter have their own largely followed and yet abandoned accounts, often run by superfans. Friends, which still thrives in reruns, boasts no official account, but there is a dead-since-2010 fan-run account that four years ago was campainging for a Friends film.

We need to get a bunch of celebrities to RT #FriendsTheMovie. How do we do that? #Blameitontwitter

You can explore more of the wonders of dead TV social media at Splitsider.