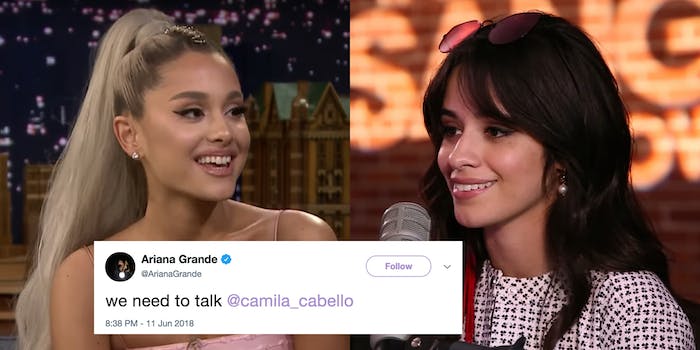 Ariana Grande has had a busy week. Between news about her new album Sweetener, set to drop in July, and her engagement to Saturday Night Live star Pete Davidson, it’s no wonder Grande’s Twitter feed has been abuzz.

Following a string of cryptic tweets from the past week, Grande sent out another mysterious message on Monday evening. This time she wrote to fellow pop star Camila Cabello, sparking rumors of a possible collaboration.

we need to talk @camila_cabello

Though many users were left speculating on the meaning of her latest post, some savvy fans made the connection instantly. Those who were familiar with the singers’ close friendship replied with GIFs and photos of the two together and pointed out instances of them referring to each other as “wife.”

Because Grande is getting married to Davidson, as fans concluded, it means that her and Cabello’s “marriage” sadly has to end.

The ominous message soon turned into a sweet interaction between the two. Cabello jokingly responded to the news of Grande’s engagement with playful indignation, confirming fans’ theories about the initial tweet.

Despite Grande’s potential custody battle over the cannolis and pets, we doubt the newly-engaged singer is too upset. According to TMZ, Davidson allegedly spent nearly $100,000 on Grande’s custom-made engagement ring. Beats the dogs, doesn’t it?