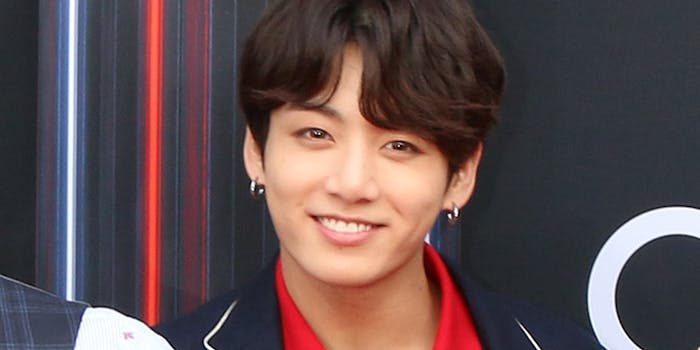 There seemed to be quite a bit of misinformation around the accident.

Jungkook, a member of massively popular K-pop group BTS, has admitted fault in a car accident that occurred in Seoul, South Korea over the weekend.

The 22-year-old singer admitted to hitting a taxi with his Mercedes-Benz, though management company Big Hit Entertainment reports that neither Jungkook nor the taxi driver sustained “major injuries.” In a statement, Big Hit said the case still isn’t closed so more details aren’t available, but that Jungkook made an “amicable settlement” with the driver: “We once again apologize to the victim. We also apologize to the fans for their heartfelt concerns.”

BTS fans were certainly concerned. The hashtag #JungKookCarCrash started circulating after the news came out, and a faction of fans pushed back against rumors that Jungkook was under the influence when he hit the taxi.

The hashtag appears to have originated in a tweet from Keemstar, a YouTuber who covers social media drama. He alleged that some fans seemed to be “trying to hide the truth” by “spamming” hashtags in an effort to push positive results to the top of search. In the comments of his tweet, some people insinuated that the taxi driver Jungkook hit was injured or even died, and that fans were trying to cover it up, though nothing has been reported confirming that.

Jungkook caused a car accident hurting a taxi driver & BTS fans are trying to hide the truth by spamming Jungkook & other tags to alt search results (RT ) so they can’t get away with this! #JungKookCarCrash pic.twitter.com/JJzQaquHAC

Kpop stans trying to cover up the #JungKookCarCrash is honestly sick.

Bruh, either way, it’s a car accident. Yes, it is important and deep.

Indeed, there were tweets that urged fans to “clear the searches,” but fans also assumed Keemstar was getting involved for clout. He previously feuded with K-pop stans over the summer.

The hashtag #JungkookWeLoveYou got more traction on Monday, however.

a true man accepts his mistake and knows how to apologize,. 💜
We're glad you're ok Jungkook!#JungkookWeLoveYou pic.twitter.com/0wtZJalhKN