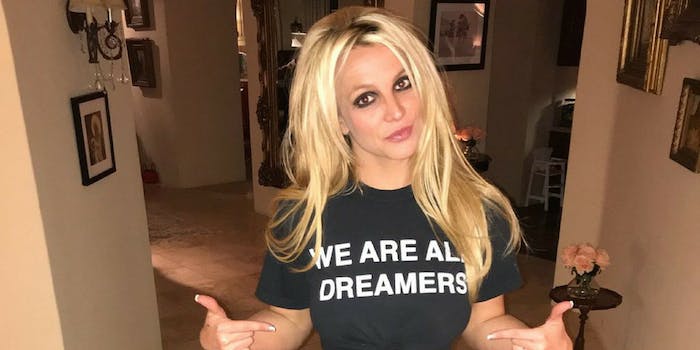 Britney Spears supports Dreamers and her fans are all for it

Her T-shirt says it all.

In September, Attorney General Jeff Sessions ended the Deferred Actions for Childhood Arrivals (DACA) program, putting thousands of legally-working undocumented immigrants at risk of deportation. Now, as immigration activists push for Congress to pass a clean Development, Relief and Education for Alien Minors (DREAM) Act to protect immigrants from deportation and to give them a path to citizenship, Britney Spears wants to enlist your help.

On Friday night, Spears shared a classic full-body photo of herself wearing a black T-shirt with the statement, “We are all Dreamers.”

“Tell Congress to pass the #DreamAct,” she urged, linking to Emerson Collective, a California nonprofit encouraging immigration reform that created the shirt.

Spears’ fans flipped for the star’s support of Dreamers, the undocumented immigrants who would be affected by the legislation.

I HAVE QUITE A FEW FAVES… but she’s the only one to step out and explicitly state her support. She has such a good heart and that’s why I love her so much.

Nothing but respect for MY president. https://t.co/zhIH9HYyCY

Last Wednesday, Dreamer activists rallied at Capitol Hill to protest the passing of the spending bill until it includes a version of the DREAM Act without concessions for border wall or security funding, according to Democracy Now. Without a DREAM act, 700,000 undocumented immigrants are at risk of being deported once their two-year DACA permits expire, with more than 13,000 people having already lost their DACA permits since September.

In the words of Spears herself, “You better call Congress, bitch.”