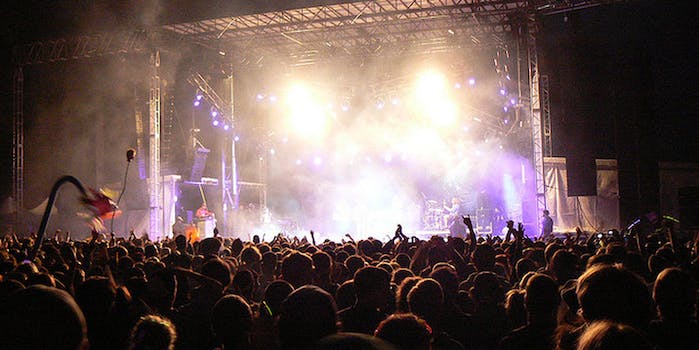 Don't be that guy.

Music makes us feel stuff: joy, melancholy, rage, disquiet. Also, frequently: unbridled enthusiasm. Especially in a live performance, a reptilian sector of the human brain takes hold, prompting fans to forget the assumed boundary between a performer and their audience.

Thus, every musician will at some point find themselves sharing the stage with someone who doesn’t belong there. And how they react in that moment says a lot about them, as well as the nature of celebrity, art, and delusion. Here are some of our favorite encounters.

When an overzealous and seemingly drunk woman tried to hug Maroon 5’s Adam Levine during an Anaheim show this week, he was able to play it cool until security stepped in.

At the 40th Grammy Awards in 1998, Bob Dylan was performing “Love Sick” when one of the background head-bobbers tore off his shirt to reveal the words “SOY BOMB” written on his torso and began dancing amid the band. Dylan looked bewildered but took it in stride.

When Taylor Swift came face-to-face with an obsessive fan, she was nothing but smiles.

Playing in Albany, N.Y., Sir Paul McCartney saw a curious pair of signs held aloft by a couple in the crowd. “He won’t marry me ’til he meets you,” read one, while the other stated: “I’ve got the ring and I’m 64.” McCartney invited them both onstage, where they got properly engaged.

Afroman generously asked a bro to join him onstage for a toke at a Christmas show last year, but when the guy didn’t pass after puffing, he chucked him back into the sea of stoners.

Some poor sucker tried to get rapper Riff Raff’s attention during a set, but all he got was a flying tackle from his security guard, Burly Boy Kane, who proceeded to dump him offstage.

New York rapper Action Bronson, meanwhile, didn’t wait for the hired help to dispense with a pesky stage-crasher. Instead he dropped the mic and sent the dude packing himself.

Not sure what this Aussie dude was thinking when he decided to dangle from a stage truss during a New Year’s Eve A$AP Rocky concert, but we can only assume he regrets it.

Just who in the world would start a fistfight with Run the Jewels? Right in the middle of a blazing verse? And then try to take on their entire retinue of security personnel? This guy.

Afroman should stick to throwing people who rush the stage, because when he knocks them out with haymaker punches, the show ends early and he gets carted off to jail.

The craziest thing about this shirtless Brazilian guy trying to drag Beyoncé offstage mid-song is that afterward, she stood up for the guy, saying that he “just got excited.”

Tim McGraw didn’t take too kindly to a woman who grabbed at his crotch and apparently ripped his very nice jeans; indeed, video appears to show him slapping her for it.

Jay Z stepped aside to let a 12-year-old named Justin spit some bars at a show in North Carolina last year, and he may well have discovered his heir in the process.

Jason Mraz pulled up a shaker-bearing Taipei fan for some impromptu accompaniment during “Be Honest” and was shocked—in a good way—when the guy could harmonize, too.

Michael Bublé took a huge risk by letting a mom coerce him into singing a duet with her her 15-year-old son Sam, but it paid off big time—and the crooner couldn’t have been happier.

A Los Angeles audience got a pleasant surprise from Kristin Chenoweth’s special guest Sarah Horn when the two duetted Wicked’s “For Good” in 2013. Turns out Horn is a vocal coach, so let’s just say she knows what she’s doing.

The lessons here are simple: If you want to get on stage, you’d better have a modicum of talent, and it’s best to make sure your hero wants you up there. Also, better to just leave Afroman be.

Photo via Curran Kelleher/Flickr (CC BY 2.0)