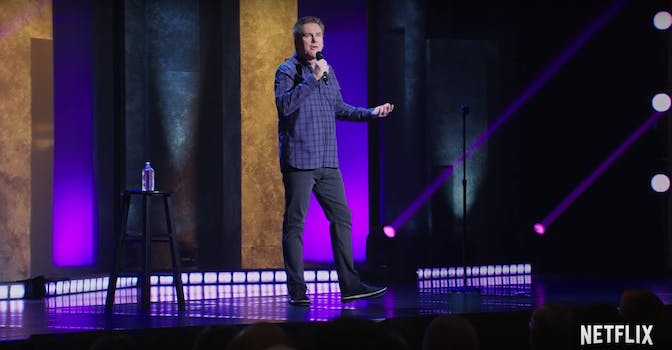 With 2017 coming to a dark close, there is one comedian who can pull us away from the impending doom of politically heated holidays. He riffs on Pop Tarts and baseball, and anyone can laugh along.

In late November Brian Regan debuted his first of two new Netflix standup specials, Nunchucks and Flamethrowers. And while he doesn’t revisit his classic Pop Tart instructions bit, he’s got a brand-new hour of material.

Regan is unofficially known as “the king of clean” but it’s his approach to comedy that sets him apart from his contemporaries. His special compliments his body of work, sticking with silly observations, funny voices, and a non-political, goofy sense of humor. Going crass has never been Regan’s forte.

“You have to do what’s natural for you,” Regan tells the Daily Dot from his hotel room in Los Angeles. “I’m not opposed to dirty comedy, but it should come from comedians who have dirty minds. And it would have to be organic for them… I was always into quirky, silly, and goofy things, so I never really ventured into the dirty world. At least comedically. Onstage there is a certain kind of comedy that I am into and it doesn’t include getting into a raunchy area.”

Regan realized early in his career that profanity was not his thing. In fact, he knew when he got onstage and the audience yelled, “Profanity is not your thing!”

He also stays away from heavy political commentary. In the special, he only briefly references the president. At one point he jokes about not talking about politics at the dinner table because he doesn’t want to get yelled at.

Regan comes from a conservative, supportive, and funny family who has had a huge impact on his success. In particular, he points to his parents and the humility of his father as big drivers of his career. In his special Regan describes his dad’s weird sense of humor as one that purposely left people out of the loop. He pays homage with a few good bits about him.

“He was a wonderful guy,” Regan says of his dad. “He had a great heart. He was very caring towards everyone. If I could be half the person he was in terms of how he treated people it would be an honor. He was very funny. He had a very weird, interesting sense of humor. He was a good man. He worked a regular job, nine to five. And every time he came home and he would get out of the car and he’d put a smile on his face. We’d be playing basketball and he’d say give me the ball, let me take a shot. He would just flip into family mode. He was a good guy.”

Regan gets a little emotional, but shakes it off: “I just got something in my throat that’s why I am coughing awkwardly.”

With the holiday season in full swing, we can button up our coats and prepare for more darkness to approach. Regan’s hospitable and inclusive comedy will be streaming when you need a mental health break from your news feed, and probably riffing on Pop Tarts.