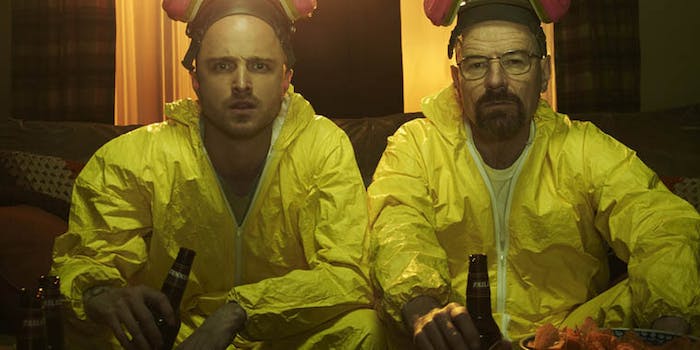 If you’re not caught up on one of the most-talked-about shows on television, social media can be hell.

Spoiler warning: This article about Breaking Bad spoilers contains one massive spoiler. So be careful!

When the credits finally rolled, I sat in disbelief. It was my sixth episode of the night. I was numb from what I had watched. But I also let out a giant sigh of relief.

I finally caught up with Breaking Bad before anyone could spoil it for me online, with just over two days until the finale

The Internet has changed the way we watch TV. In recent years, countless entertainment punits have labelled Twitter new water cooler, thanks to the way it makes it so easy for everyone to discuss their favorite shows as they’re happening. That’s great, especially if you’re one of those cool kids with cable.

But if you’re not caught up on one of the most-talked-about shows on television, social media can be hell.

I lost count of how many people had recommended Breaking Bad to me over the years; I got the impression that their fanaticism was similar to me telling everyone I knew to watch Game of Thrones. It was the best show on television, they said. You’d lose your soul and you’d be dead inside, but it was so worth it because it was. That. Damn. Good.

I already knew about Jane, Gus, and the whole “I am the one who knocks” speech. I had written over a dozen Breaking Bad stories in the past year and the first scene I saw was the last one aired at the time: Hank Schrader’s shitty epiphany. But I didn’t know how the show got there, so I jumped in.

I ran into a slight problem. I wasn’t watching quickly enough, so I was only on season 2 by the time the last eight episodes started airing on AMC.

I panicked. With seemingly everyone on all of social media watching or writing about it, I had to act fast. People are always blaming the ones who get spoiled: it’s your own damn fault for attempting to Internet at the same time as watching the show. Now that’s a reasonable argument to make the night of the episode. Maybe even a day or two later.

But what can you do when you finally risk going online a week or two later and people are still talking about an episode like “Ozymandias,” especially when your job is to write about the Internet?

I found an unlikely ally in the royal baby. Or, rather, people who devised methods for avoiding the birth of Prince George on Twitter. I found the best social media filters I could get my hands on for Twitter, Tumblr, and Facebook. I loaded them with every possible hashtag, episode title, and name I could think of. And I waited. Each extension had its flaws, of course, and occasionally I would forget to load a name into the filter.

It was all smooth sailing until “Ozymandias” aired, and the “oh no’s” and “holy shit’s” echoing across the Web were enough to tell me that this was the Big One.

Many of us at the Daily Dot are Breaking Bad fans. People online loved to spoof the show, and all those YouTube remixes are our bread-and-butter here. Our chatroom became its own water cooler when it came to discussing TV. The staff members who watched it were vague when discussing an episode, and story ideas with spoilers were marked so—something we also did for the Red Wedding.

But it was a Reddit thread I clicked on for an article a couple days later—one that had absolutely nothing to do with Breaking Bad—that introduced a spoiler. Later, a screengrab posted on Tumblr without any tags. I looked away as quickly as I could, but I saw enough to guess that Hank Schrader had died.

I put my binge on overdrive. I’d finished a season in a few days’ time and text my two biggest enablers about my progress. They were often incoherent, caps lock, and full of expletives.

I watched in horror as I consumed the show at an even quicker pace, and I finally got to “Ozymandias” in the midst of that final six-episode marathon. And yes, it was as horrific and amazing as everyone said. There’s a reason it still has a perfect rating on IMDb.

I’d go on Twitter from time to time, but tweeting about how far I had gone or my hatred—and by hatred I mean absolute love—for this show became less important. For once I didn’t want to tell Twitter about the latest “holy shit” moment or watch that more than the TV. I kept it offline and rushed onto the next episode.

Netflix came out with a handy Twitter filter that would black out anything to do with the show in time for the finale, but for me it was too late.

We’ve been debating just how to handle spoilers on the Internet, both in articles and on social media, for years. What exactly constitutes a spoiler, and how long before we consider that tidbit general knowledge? And when exactly did the results of live sporting events become a spoiler?

As the series finale gets even closer, I’m not the only one marathoning the show as fast as I possibly can. It’s not about FOMO (fear of missing out). Instead, it’s FOBS (fear of being spoiled). I probably would’ve taken my sweet time powering through the episodes on Netflix otherwise.

Considering that we’re still talking about this problem years later, we still don’t have a clear answer. I did my part and blocked out as much noise as I could. Staying offline the night-of is still a sound option, and so is unfollowing someone until things die down. But also ask your friends to tweet with care because you want to watch it like they did: spoiler-free. Even the Breaking Bad subreddit has been doing its best to avoid spoiling the people who visit while catching up. Is that too much to ask?

Maybe it’s time to take social media out of the TV equation.

Tonight, I’m watching the old-fashioned way: with my computer off.