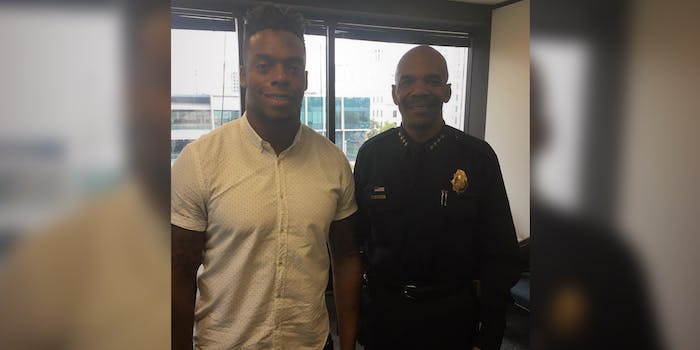 Six days ago, the NFL‘s second most famous Brandon Marshall took a knee during the national anthem in solidarity with his former Nevada teammate Colin Kaepernick. Their protests were controversial, defiant, and intended to spotlight police brutality.

Today, Marshall took to Instagram to set the record straight—and unveiled a plan to help make a difference.

On Thursday, Sept. 8, I took a knee for the National Anthem to take a stand against social injustice. My intent was not to offend anyone but rather to simply raise awareness and create some dialogue toward affecting positive change in our communities. In the last week, I’ve had a lot of productive conversations with people I respect, including Chief White of the Denver Police Department. I really appreciate all of them taking the time to listen to me and offer some insight and feedback on ways we can all make a difference. I’ve also had a lot of time to personally reflect on important issues such as race and gender equality, the treatment of our military veterans, our relationship with law enforcement, educational opportunities for our youth, and many more. I recognize and applaud the significant progress that has been made in these areas made possible only through the hard work of so many dedicated leaders. But, it’s clear there is so much more work to be done by all of us. Together, we all need to Stand Up for change. This starts with me. My work with the Rose Andom Center to stop domestic violence is fulfilling and close to my heart. But I need to do more. I plan to be involved with several other organizations that benefit the Denver community and others through the services, awareness and funds they provide for these critical social issues. And I will donate 300 dollars for every tackle I make this season to those programs. You can track these contributions on social media through #TackleChange. I’m truly grateful for the support I’ve received from so many people, especially my teammates. I look forward to preparing with them and focusing on an important game Sunday against the Colts.

Posing with a Denver police officer, Marshall wrote that he’s had “productive conversations” with law enforcement. He also pledged to donate $300 for every tackle he makes this season to “organizations that benefit the Denver community,” though it’s unclear which outlets he has in mind.

“You can track these contributions on social media through #TackleChange,” he said.

The Denver Broncos linebacker protested during a high-profile, prime-time Super Bowl rematch against the Carolina Panthers last week, and it set off a social media firestorm in the process.

“I support Colin. I support ‘Kaep.’ I understand where he’s coming from,” Marshall said, via the Denver Post. “I definitely see what he’s saying. I support him on that. I’m not mad at him for that. Some people are bashing him on the internet, but I’m not bashing him at all. I support him.”