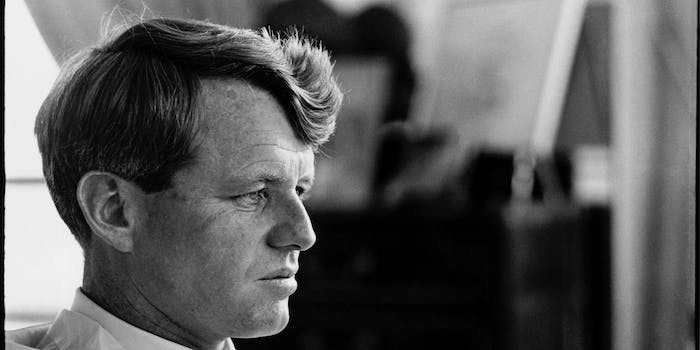 The 4-part docuseries arrives on Netflix in time for the 50th anniversary of Kennedy’s assassination.

Almost half a century after Robert F. “Bobby” Kennedy was murdered on June 5, 1968, it’s hard to not wonder what the U.S. would be like if he had survived. The civil rights activist and near Democratic presidential candidate was a champion of peace. Many saw him as a beacon of hope in the midst of strife both domestically and internationally.

Netflix and director Dawn Porter set out to memorialize Kennedy in four-part docuseries Bobby Kennedy for President. The series—compiled of rare, newly digitized footage as well as interviews with his close confidantes—provides a comprehensive and ultimately devastating dive into the life, death, and legacy of Kennedy. Although watchers will know its tragic ending from the start, Bobby Kennedy for President will make just about any casual viewer into a fan.

The series begins with the backstory of the Kennedy family, a large and wealthy lot that reportedly instilled in its children the importance of using their privilege to accomplish something meaningful while alive. The first episode chronicles Kennedy’s support of his brother, John F. Kennedy, as he runs his campaign to become president and then served as his attorney general, leading up to the death of the late president in 1963. Although the series doesn’t shy away from Kennedy’s less popular political moves—he played a role in McCarthy’s Red Scare and was responsible for wiretapping Dr. Martin Luther King Jr.—the first episode also plants the seeds of Kennedy’s evolution into a civil rights activist.

The vintage footage of Kennedy proves to be detrimental to the storytelling at times; the poor quality of both the images and audio make it hard to follow and remain focused on the chain of events. Kennedy’s wife Ethel, his sisters, and Jackie Kennedy are all mostly absent in the footage and never heard from. Not a single living family member gives an interview; instead, the series relies on the perspectives of former personal aides, staff members, and friends.

Yet he series provides a stunningly detailed summation of Kennedy’s political life. The second and third episodes follow Kennedy as a U.S. senator and his campaign to become president. It chronicles his work as a social activist and shines a spotlight on his most notable contributions, including his visits to the impoverished in the Appalachians, he and Cesar Chavez breaking bread together, and his infamous speech in Indianapolis the night that King was shot that kept citizens in the city from rioting. While the series covered his brother’s assassination in just two minutes, it dedicates a whopping, painful 20 minutes to the assassination of Kennedy in 1968.

An older generation that grew up alongside Kennedy may not find the series revelatory but might appreciate the series’ comprehensive and insightful storytelling that captures more than just the journey of Kennedy but also displays the history of the fight for civil rights. But the series might appeal even more so to younger generations who’ve only received a basic overview of the Kennedy family in their history classes. In this age of the Black Lives Matter and #MeToo movements, Bobby Kennedy for President provides millennials and Generation Z a refreshing civil rights hero from whom to garner inspiration.

The biggest fault in the series is the gratuitous amount of time spent covering the trial of Kennedy’s alleged murderer, Sirhan B. Sirhan, and several theories that there was a larger conspiracy to murder Kennedy and King. The final episode dedicates a measly eight minutes to review how Kennedy’s legacy survives through the work of his friends and in the founding of the Robert F. Kennedy Community School in California—built upon the same property where Kennedy was assassinated and famously fought for in court against now-President Donald Trump. The series would have done a better service to Kennedy’s legacy by exploring the movements that followed his death and giving viewers concrete ways to continue the social work he began.

Fifty years later, the man whose final words were, “Is everyone OK?” can provide Americans—especially white Americans looking to use their privilege to bring about social change—with the blueprints of how to support the disenfranchised. One of the most striking comments Kennedy tells a reporter in the ‘60s is that listening to the young people educated him and inspired him to act. Today as the U.S. comes at a head yet again with inequality and political divisiveness, a younger generation might now in-turn learn something from Kennedy’s pursuit to leave the world a better place than he found it.