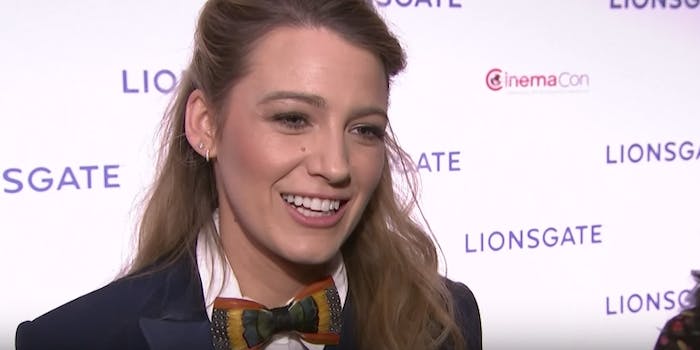 That's one way to market a movie.

Actor Blake Lively made headlines on Tuesday when fans started noticing that she’d deleted her entire Instagram archive and unfollowed everyone she’d previously been following—including husband Ryan Reynolds. Is there trouble in paradise? Is the star taking some dramatic career pivot? It turns out it’s viral marketing for her new film.

Here are the clues: Lively changed her Instagram bio to “What happened to Emily?” and now only follows 31 accounts, all belonging to people named Emily Nelson.

I’m so confused why is Blake Lively’s entire Instagram deleted and now she only follows girls named Emily Nelson pic.twitter.com/p2PuPLtLBw

According to People, prior to deleting all of her pics, Lively’s final post was a game of hangman that spelled out “What happened to Emily?”

If all of this seems odd, it’s about to make more sense. It turns out the actor is set to star in a mystery thriller called A Simple Favor alongside Anna Kendrick and Linda Cardellini, and it hits theaters in September. According to the movie’s IMDb page, Lively’s character is named Emily Nelson, a woman who “suddenly disappears from town.” The film follows Kendrick’s character, Stephanie, as she tries to find her. According to Variety, the story (based on a book with the same name) is similar to Gone Girl and The Girl on the Train—so a celeb-filled blockbuster geared toward women.

Fans and media were initially shaken by the change in Lively’s grid:

This is a mission for Gossip Girl!!!!! pic.twitter.com/i2eHESH0wq

But with the Emily Nelson clues and the cross-platform promotion, it’s safe to say that we’re looking at some high-end social marketing.

Kudos to Blake for being willing to sacrifice her grid, though. That’s dedication to the role.