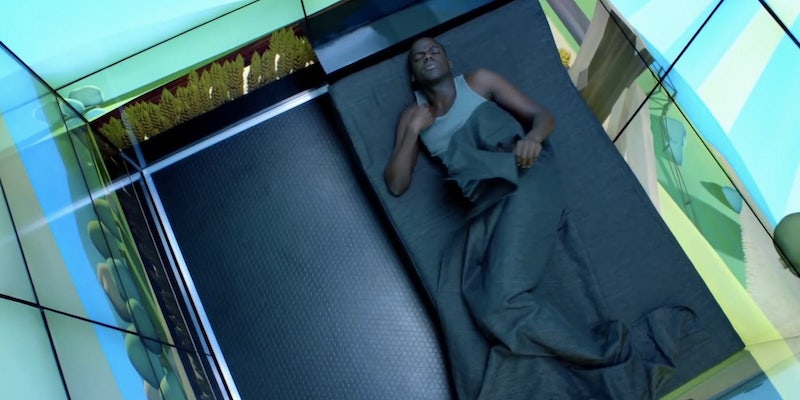 There could be an American adaptation of ‘Black Mirror’

Will the sci-fi anthology hold up on U.S. television?

America’s new favorite British TV show Black Mirror may have an American version in the works, thanks to Endemol Shine.

The British science-fiction anthology series caught fire stateside after it appeared on Netflix. Despite it not being available on Netflix or U.S. television, diehard fans even found ways to watch the newest holiday special starring Jon Hamm. It’s safe to say there’s at least baseline interest for an increased access to the show in America.

CNN’s Brian Stelter was interviewing Charlie Corwin, the co-CEO of Endemol Shine North America, at a conference, when Corwin included Black Mirror on a list of foreign TV formats “ripe for American remakes and redevelopment.” When Stelter followed up about Black Mirror specifically getting a U.S. remake, Corwin replied, “I can’t say.”

Black Mirror falls under Endemol Shine’s purview since it’s produced by Zeppotron. Shine’s MO is to export and develop TV projects from all over the world. Variety reported that U.S. cable channels were hesitant about the series already existing episodes for broadcast. Eventually it found a home on DirectTV and Netflix.

Unless the two seasons of six episodes (plus holiday special) are being remade word-for-word by an American cast and crew, there’s a chance an American version of the series won’t be the same type of abject failure as other Americanized versions of British shows. When Skins made the jump to MTV, it flopped by trying to recreate the iconic first season instead of expanding within the universe. Gracepoint, an Americanized version of Broadchurch, brought over by Endemol Shine, was not renewed for a second season.

Black Mirror‘s anthology nature means each episode can stand alone, and an American version could live as a complement to the British one—a new season of the series within the same collective ideology but with different plots. If it can pull that off, it might be one of the first global TV series with versions in different counties working to further the collective whole rather than reinvent the creative wheel.