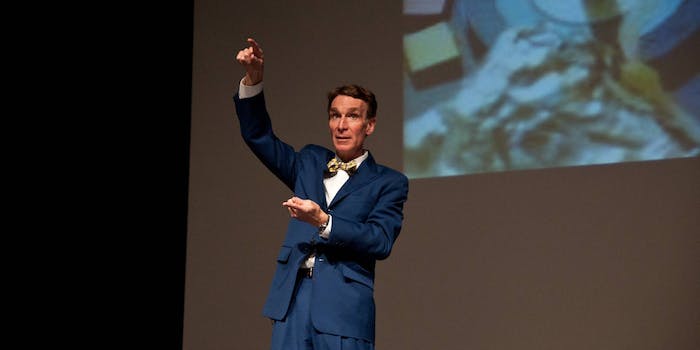 Longtime educational TV host and resident internet scientist Bill Nye is taking the science all the way to Netflix.

Netflix announced Wednesday that Nye will host Bill Nye Saves the World, a new talk show set to be released in the spring of 2017. When announcing it on Twitter, Netflix used an apt Nye reaction GIF to celebrate.

In 2017, we're doing a talk show with @BillNye. It's an experiment. pic.twitter.com/gE4bOIhV6a

Not much is known about the show yet, but the official synopsis makes it sound like it’ll be basically what Nye is already doing online: using science and logic to tackle pop culture and politics.

“Each episode will tackle a topic from a scientific point of view, dispelling myths, and refuting anti-scientific claims that may be espoused by politicians, religious leaders, or titans of industry,” the synopsis reads.

The show appears to be a great fit for Nye, who’s on a mission to get people excited about science. And the show promises to have “experiments, demonstrations, and special guests,” so for some, it might feel like a brand new episode of Bill Nye the Science Guy is streaming on Netflix.

With Mike Drucker as the head comedy writer and astronomer Phil Plait as the head science writer, it’s evident that both parts will be essential to Bill Nye Saves the World.

“Since the start of the Science Guy show, I’ve been on a mission to change the world by getting people everywhere excited about the fundamental ideas in science,” Nye said in a statement. “Today, I’m excited to be working with Netflix on a new show, where we’ll discuss the complex scientific issues facing us today, with episodes on vaccinations, genetically modified foods, and climate change. With the right science and good writing, we’ll do our best to enlighten and entertain our audience. And, perhaps we’ll change the world a little.”

It’s not Netflix’s first talk show—Chelsea Handler’s Chelsea, has been airing since May—but the fairly new territory of talk shows on Netflix will allow Nye’s show to experiment in a way that it doesn’t get to on traditional television. We won’t know until closer to its release date how often it will make episodes.