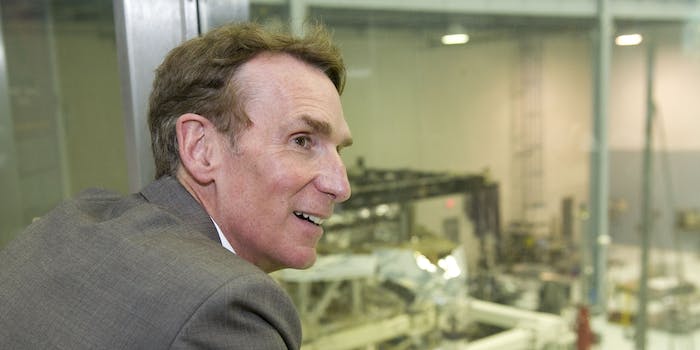 Today is a fine day for science—or for the science-loving nostalgics in all of us.

While most people tuned into Game of Thrones and the Mad Men series finale Sunday night, some started to discover that Bill Nye the Science Guy, the beloved ’90s educational program from our favorite bow-tied scientist Bill Nye, had arrived on Netflix.

Only 31 of the original 100 episodes made it to the streaming service so far, but that’s not stopping people from getting settled in front of the TV or computer screen to binge-watch an episode or 30.

News you can use: @BillNye The Science Guy is #NowOnNetflix. The kids love it and I'm stoked to be able to play it for them at home.

Sure, some of the information is outdated—for example, Pluto is no longer a planet—but for the most part people find out that it holds up pretty well.

“I am a middle school science teacher and I still use the episodes, or small sections of them during class when I don’t have the time to set up a complicated demo,” a redditor wrote. “I fill in the updated information that is different from what he may have shown. He is a good introduction to basic science concepts.”

Regardless of how old the episodes may be, we’re positive of one thing: