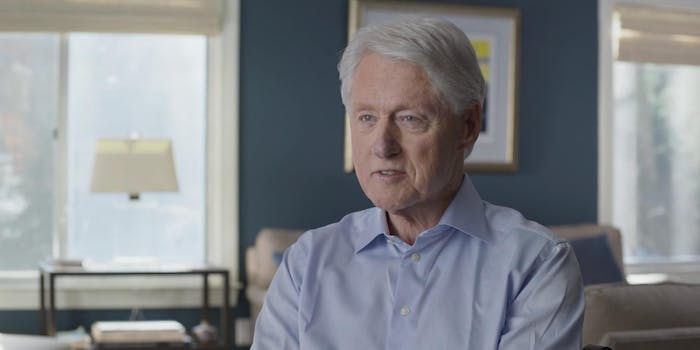 The 'manage my anxiety' quote, explained.

Hulu’s four-part Hillary docuseries is now streaming, giving viewers an even more in-depth look into the life and career of Hillary Clinton. But in the lead-up to its premiere, it’s getting just as much attention for what others have said in it.

The third episode of the docuseries, titled “The Hardest Decision,” draws parallels between the early stages of the general election (once Clinton started running against Donald Trump) and the latter half of Bill Clinton’s presidency. Both Bill and Hillary Clinton speak about the latter, mainly in regards to Bill Clinton’s affair with Monica Lewinsky and the effects it had on the country, their marriage, and their daughter Chelsea. (While writing about her experience in light of the Me Too movement, Lewinsky described the affair as a “gross misuse of power” and highlighted the power imbalance a White House intern would’ve had with the president of the United States.)

“We all bring our baggage to life and sometimes we do things we shouldn’t do and it was awful, what I did,” Bill Clinton said.

Bill Clinton’s comments on the affair have been getting a lot of attention, most notably a quote about “Things I did to manage my anxiety for years” in an answer that touches on why he risked everything to have an extramarital affair, spread widely thanks to a New York Post tweet that’s been used to mock Bill Clinton’s comments.

A greater context of Bill Clinton’s quotes gives you more insight into what he was thinking at the time, although it’s still pretty damning in its entirety.

The quote comes late in the episode after footage of Bill Clinton’s apology to the country is shown. Director Nanette Burstein asks Bill Clinton directly why he took the risk of having an affair. Bill Clinton pushes back at the question a little, pointing out that nobody thinks about the consequences when they do stupid things.

“Nobody thinks, “I think I’ll take a really irresponsible risk that’s bad for my family, bad for my country, bad for the people who work with me.” That’s not what happened. You feel like you’re staggering around, you’ve been a 15-round prize fight that’s been extended to 30 rounds and here’s something that will take your mind off it for a while. That’s what happened.

“Because whatever life—not just me, everybody’s life has pressures and disappointments—terrors, fears of whatever. Things I did to manage my anxiety for years. I’m a totally different person than who I was 20 years ago. Maybe it’s just getting older, but I hope it’s also going through a lot of this. What I did, it was bad. But it wasn’t like I thought, ‘Let’s see, how can I think about the most stupid thing I could possibly do and do it.’ It’s not a defense, it’s an explanation. It was awful. I feel terrible.”

Both Bill and Hillary Clinton’s comments on the affair reveal. They’re both clearly uncomfortable talking about it, although they’re more open about what happened and the after-effects it had on them and their marriage. Bill Clinton’s reputation was damaged, and that—along with other factors—led to him being considered a toxic element of Hillary’s presidential campaign. But it also affected Hillary Clinton’s career as well. It became another touchpoint of how she was damned if she did, damned if she didn’t: While she was seen as brave by some for staying with him, others felt that she should’ve left him for his infidelities.