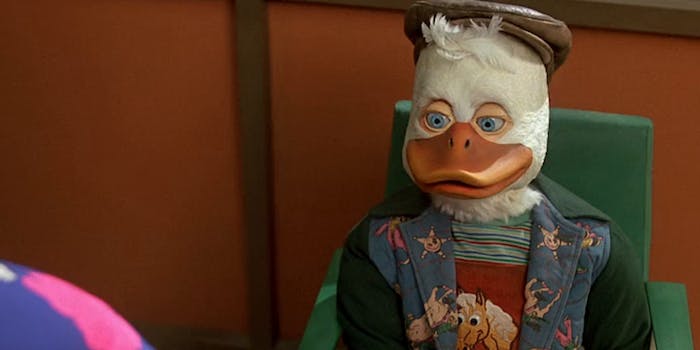 RANKED: The best worst movies you need to watch

Fuel your hate-watching with movies so bad, they're actually kind of good.

Watching a bad movie on purpose can seem absurd, especially when streaming has given us on-demand access to some of the best movies of all time. However, anyone who’s ever sat through a movie completely bewildered, wondering who thought this would be a good idea knows that there’s a certain kind of joy in watching a cinematic train wreck. In the spirit of hate-watching, here are ten of the best worst movies you can stream right now.

Let’s set the stage here with some facts: Troll 2 is not a sequel to anything. It is in no way shape or form related to the 1986 horror film Troll, as one might assume. There is not even a single glimpse of a troll in the entire 94 minutes that this film goes on for.

There are, however, vegetarian goblins running amuck in the town of Nilbog, who aim to turn people into vegetables so that they can eat them while adhering to their vegetarian diet. When the Waits family visits Nilbog, nobody listens to young Joshua when he warns his family about the goblins. As if all of this wasn’t absurd enough, the production is amazingly, awe-inspiringly horrible. Yet by some strange alchemy, it’s impossible not to enjoy it.

When Bill and Ted’s Excellent Adventure graced the world in 1989, the critics wrote it off as a Bad Movie. The Washington Post called it “dilapidated.” The New York Times called it “painfully inept.” However, in other circles, Bill and Ted’s Excellent Adventure has always been beloved for being the time-traveling, Van-Halen-loving, historically-inaccurate bodacious trip that it is. Rolling Stone declared it one of the ten best stoner movies of all time.

It’s easy to see why it’s gotten that accolade: A young Keanu Reeves and Alex Winter play two teens who are failing in school but have high hopes for their rock band, Wyld Stallyns. Unbeknownst to them, the music of the Wyld Stallyns will one day form a utopian future society. Is it unquestionably silly? Yes. But it’s also stupendously fun.

Somehow, Sixteen Candles and Say Anything are not John Cusak’s most dated movies. The 2001 cheese-ball Serendipity makes the early 2000s seem like an alternate reality. Cusak and Kate Beckinsale have a meet-cute over a pair of cashmere gloves, have dessert, and go ice skating, even though they’re seeing other people.

Beckinsale has a problem with personal accountability and wants fate to make all of her choices. So instead of this man’s number and following her true feelings, she makes him write it on a five-dollar bill and then uses the bill to buy mints. If it’s meant to be, she reasons, the bill will come back to her. In the age of smartphones, Google, and social media, this experiment is less romantic than it is laughably hokey and nonsensical.

Rivaled only by Hubie Halloween, Jack and Jill is Adam Sandler’s worst movie. If you’re not a natural-born hate-watcher, Jack and Jill will be your crash course. There is no need to watch Adam Sandler play himself and his twin sister, yet you probably won’t turn the movie off in time to not see it through.

It’s not just Sandler’s portrayal of his own sister that’s so bad. The plot revolves around Sandler trying to entice Al Pacino to do a Dunkin Donuts commercial. One has to wonder, what made Pacino agree to do this movie? In the end, Pacino does the commercial and is unhappy with it, telling Sandler to “Burn it.” Why did this movie not meet the same fate?

5) The greatest disappointment: Life Itself

In 2018, my mother and I decided to watch Life Itself. It’s listed as a comedy, and we like comedies. Instead of enjoying a few laughs, we were the most bamboozled that we’ve ever been in our entire lives. Life Itself is overflowing with trauma, darkness, and bad luck. Suicide, disease, car accidents, and untimely deaths abound. Even the Bob Dylan soundtrack does not redeem the movie. Instead, it leaves me angry that Columbia Records agreed to let such an awful movie use his songs.

My best friend was also lured into the movie under its “comedy” facade and shared in the bleak disappointment. Even though none of us enjoyed this movie, it is one that we all still talk about to this very day. So that must count for something.

6) Best worst Nicholas Sparks movie: The Best of Me

It’s hard to pick just one bad Nicholas Sparks movie to represent its kind, but The Best of Me floats to the top of the muck. One of my greatest grievances against this film is that they ask us to believe that Luke Bracey grows up to be James Marsden. Why couldn’t they have just picked one actor and used the wonders of makeup and costuming to age him?

From there, the grievances snowball out of control until they manifest in perhaps the most hated ending in the Sparks canon. Watching The Best of Me will surely make you angry–it’s best to hate-watch this one with a friend.

Reefer Madness may be one of the worst movies of all time for the fact that it accomplished the exact opposite of its intended goal. The 1936 film was made by a church group as a propaganda film. It was to be shown to parents to teach them about the harm that could befall their children should they smoke marijuana.

However, in the 1970s, the movie was embraced by stoners and has since become a cult favorite of those who appreciate cannabis and a good heap of irony.

Beloved by some, loathed by others, the Twilight saga is the best in its class when it comes to ridiculous teen romance dramas. As someone who has not re-watched Twilight since the dark days of 2008, simply re-watching the trailer raises an intense feeling of befuddlement. Was the omnipresent blue-hue really necessary? Why weren’t we concerned for Bella’s wellbeing when she told Edward, “I’d rather die than stay away from you?” Alas, the sparkling vampires and the promise of young love were simply too distracting at the time.

Reuniting Matthew McConaughey and Kate Hudson was a great idea going off of their iconic How to Lose a Guy in Ten Days. Reuniting them for a movie in which the major plot points revolve around treasure hunting? Bad idea. The critics agreed: the 2008 comedy earned an 11% rating from Rotten Tomatoes. That being said, diehard rom-com fans can’t skip out on a McConoughey flick.

George Lucas has given the world many gifts through his creation of Star Wars. He has also given the world a true stinker: Howard the Duck, a film based on the Marvel Comics character of the same name. It isn’t hard to see why the movie was such a failure: It’s a live-action feature starring an animatronic duck. The duck is just plain weird and hard to like. Even by the standards of 1986, the special effects are poor. Yet in some corners of the world, Howard the Duck has been embraced for its badness and has developed a cult fanbase.