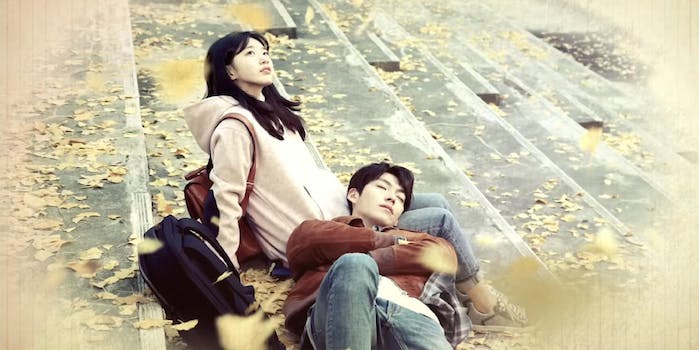 The top 5 must-watch Asian dramas of the summer

Whether you're an avid K-drama fan or a curious viewer, we're here to help.

Summer is all about lounging and relaxing… largely in the form of watching TV for hours to avoid the summer. And perhaps you’d like to enjoy doing so by sitting down with one (or all) of this summer’s must-watch dramas: Asian style.

Whether you’re an avid K-drama fan or a curious viewer looking for a way in, we’re here to help you find something to catch your attention with our list of essential Asian dramas for summer ’16. Get to it.

This Korean drama stars two veteran actors, A-lister Kim Woo-bin and one of K-pop‘s most popular idol-actresses, Suzy of girl group MissA. The story follows Shin Joon-young (Kim) and No Eul (Suzy), who reunite after years of being separated post-breakup. Their paths gave rise to Joon-young as a superstar, and led No Eul to become a successful documentary producer. Despite having drastically different personalities, there’s a plethora of cute, squeal-inducing romantic moments. The trailer also hints at intense emotional scenes to rile you up as well. Either way, Uncontrollably Fond will reel you in, so you might want to stock up on snacks and tissues.

The first episode premiered this month, and new episodes will be released every Wednesday and Thursday. It is showing exclusively on Asian drama streaming site, DramaFever.

You can also check out some scenes from the drama in the music video for the drama’s title track, “Ring My Bell,” which Suzy sang herself for the soundtrack.

Also referred to as Bring It On, Ghost, the adorable Kim So-hyun and manly Ok Taecyeon of K-pop group 2PM co-star as a 19-year-old spirit and 17-year-old exorcist, respectively. Kim’s character is the ghost of Kim Hyun-ji, a stressed student who died the day before her college entrance exams. Meanwhile, Ok plays Park Bong-pal, a supernatural teen using his abilities to literally fight ghosts as a means of making money to support himself. Together, Hyun Ji and Bong Pal team up to exorcise other ghosts, forming an unconventional partnership.

The first episode is set to premiere July 11 and will also be available on DramaFever.

This one features beautiful movie star Han Hyo-joo and the handsome drama prince Lee Jong-suk. The pair portray Oh Yeon-joo and Kang Chul, a couple in their 30s who exist in parallel universes. The drama intends to bring something fresh to the table by taking place in modern Seoul and having the characters move between reality and an alternate, false dimension. It’s said to be a mysterious, romantic melodrama that will keep you on edge with its plot twists and cliffhangers.

This drama will air on streaming site Viki beginning July 20 and will run through Sept. 22.

If you need a break from the K-drama world, take a step into the world of Ice Fantasy, a Chinese drama based on the bestselling novel City of Fantasy by Guo Jingming. It’s a story of royalty and conflict, set 100 years after the Ice tribe emerged victorious over the Fire tribe in the great war. Victoria Song, the leader of idol girl group f(x), plays the “lowly civilian” and brave sorceress Li Luo. Her male counterpart, Feng Shaofeng plays prince and heir to the Ice throne, Ka Suo. When war inevitably breaks out again, the two must deal with the pains of their forbidden love while respectively assuming their roles on the battlefront and in the political realm.

The drama can be viewed on both DramaFever and Viki and premieres July 24. It will run for a total of 62 episodes.

As a bonus, globally recognized Taiwanese singers Jay Chou and A-mei collaborated for the official theme song, “Shouldn’t Be.”

Although it won’t be premiering until Aug. 29, this historical drama is surely not to be missed. Also known as Moon Lovers, the story centers around Hae Soo, played by Korean soloist IU, a 21st century girl who gets transported the Goryeo Dynasty during a solar eclipse. Oh, and she’s surrounded by plenty of handsome princes, who happen to be vying for the throne. Romance, rivalry, friendship, and deception are all bound to ensue.

The drama has an all-star cast and crew to complement IU’s female lead, including male lead Lee Joon-gi, Kang Ha-neul, Hong Jong-hyun, and Exo member Byun Baek-hyun, among others. It is directed by Kim Kyu-tae, the same director of the wildly popular 2014 drama It’s Okay, That’s Love. Episodes can be viewed on both DramaFever and Viki and are slated to release every Monday and Tuesday at August’s end.

Since episodes of each drama will be released weekly, you won’t be able to binge. But they’re all premiering in a close time frame of one another, so maybe consider watching these simultaneously to satisfy the inevitable need for more. That is, if you can handle all the feels.