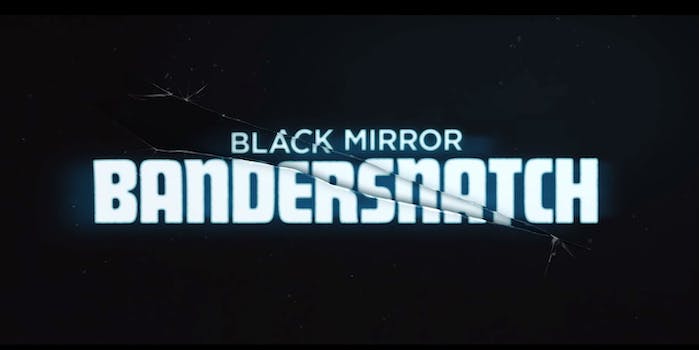 ‘Black Mirror: Bandersnatch’ has a hidden video game you can play

Emulators to the rescue.

Inside the world of Bandersnatch, the latest installment of Netflix’s Black Mirror series, there are lots of cool-seeming retro video games, which makes sense, given the plot. While there’s not a lot in the plot we’d like to bring into the real world, some enterprising viewers found that Nohzdyve, one of the games from the movie, is available to play—with the right equipment.

Bandersnatch fans managed to find a fake “fansite” of Tuckersoft, the video game company seen in the film, where they could download a number of files, including Nohzdyve, which the character Colin Ritman created.

Twitter user @SimonWad described how he downloaded Nohzdyve as a .tap file, which one can use to run a ZX Spectrum game console emulator.

So I downloaded it as a .tap file, which is built to run on a ZX Spectrum emulator. Managed to find some software which converted it into a .wav file, which I sent to my phone, which I connected to a real Spectrum using a hacked stereo to mono cable…

A little configuring, and @SimonWad managed to run Nohzdyve on their emulator, even going so far as to beat their son in a friendly competition.

Hey presto, Nohzdyve running on a recently reincarnated ZX Spectrum! Actually, there was a loading error at the end, just to add authenticity to the experience…but it ran fine anyway pic.twitter.com/xc5q0puVjX

And although he might be able to beat me at Team Fortress and Rocket League, I whooped my son at this game. Still haven't lost the knack of frantically pressing those rubber keys! Pah, who needs mice, joysticks & game controllers? @DrNLK0 @matbob147 @jowinx @danielintheory pic.twitter.com/KubWORHfiq

Even better, Matt Westcott, the creator of this particular easter egg, turned up on Twitter to speak about how he created the game.

Without getting too spoilery… a post-credits scene shows the main character listening to a tape marked "Bandersnatch Demo", consisting of screechy electronic noise. pic.twitter.com/tV5bp3ZCU9

Naturally, this has caused no end of confusion to Americans and millenials who have no idea about the connection between cassettes full of screechy noise and 1980s computer games.

("Aha, you youngsters don't recognise that this is clearly a dialup modem tone!" they say with misplaced confidence to their slightly-younger cousins.)

“The version seen on-screen is in fact a cunningly-crafted video mockup, right down to the authentic-looking colour clash – I was tasked with turning that 20 seconds or so of footage into the real game,” Westcott tweeted.

The version seen on-screen is in fact a cunningly-crafted video mockup, right down to the authentic-looking colour clash – I was tasked with turning that 20 seconds or so of footage into the real game. pic.twitter.com/5SymrWGu2C

Westcott evidently didn’t even know he was making something for an interactive Black Mirror installment until the first leaks got out.

(not that I had the full picture of the project, by any stretch of the imagination. I didn't even know it was an interactive episode until that was leaked to the world a few weeks back…)

You can check out a full listing of all the Bandersnatch endings, or take a look at how the internet is reacting to some of the movie’s tough choices.

Netflix has confirmed that a fifth season of Black Mirror is on the way, but there’s no set release date.