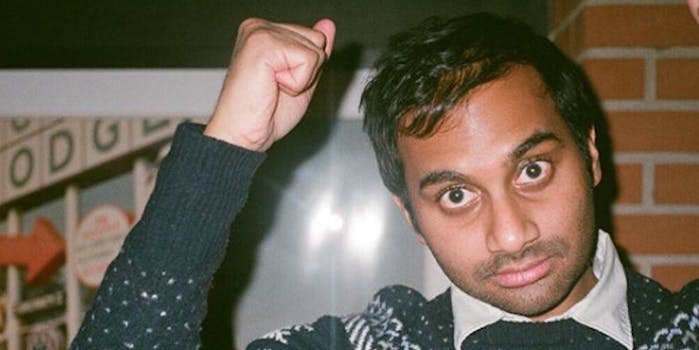 'I was surprised and concerned.'

Aziz Ansari issued an official response to an account from a 23-year-old Brooklyn photographer that published this weekend, which described an unwanted sexual encounter with the comedian that left her in “shock.”

This allegation against Ansari is the latest to surface in the entertainment industry after a months-long media conversation about how men use their power to sexually manipulate women both in and out of the workplace. What makes Ansari’s case slightly different is that his brand these past few years has been “woke bae”—and he’s probably one of the comedians you’d assume was best equipped to not unwittingly harass a younger woman. In his bestselling 2016 book Modern Romance, Ansari teamed up with a sociology professor to analyze the changing ways men and women relate to one other romantically and sexually. He wore a #TimesUp pin to the Golden Globes earlier this month.

Ansari’s allegations sparked a media-wide conversation about the nature of consent and how best to establish it. After a day of online debate, he finally weighed in Sunday evening.

In a statement released through his publicist, Ansari said:

In September of last year, I met a woman at a party. We exchanged numbers. We texted back and forth and eventually went on a date. We went out to dinner, and afterwards we ended up engaging in sexual activity, which by all indications was completely consensual.

The next day, I got a text from her saying that although “it may have seemed okay,” upon further reflection, she felt uncomfortable. It was true that everything did seem okay to me, so when I heard that it was not the case for her, I was surprised and concerned. I took her words to heart and responded privately after taking the time to process what she had said.

I continue to support the movement that is happening in our culture. It is necessary and long overdue.

The 34-year-old recently took home a best actor Golden Globe for his work on Master of None.