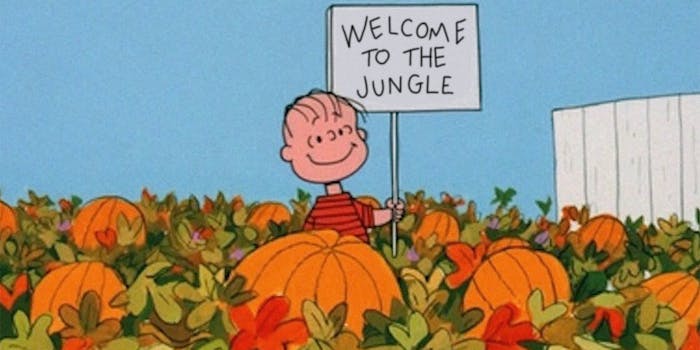 You know where you are?! You're in the pumpkin patch, baby!

Before social media, how did people find out which aging rock gods love which classic seasonal cartoon specials?

Thankfully, the dark ages of not having intimate knowledge of every celebrity’s pop culture tastes are in the rearview. We can authoritatively state that Guns N’ Roses frontman Axl Rose is a fan of It’s the Great Pumpkin, Charlie Brown.

Rose tweeted his love for the Peanuts special on Tuesday evening, shortly after the Halloween favorite aired on ABC. “LONG LIVE THE GREAT PUMPKIN!!” the singer wrote, followed by 12 jack-o’-lantern emoji.

Fans will remember the Great Pumpkin as the Santa-esque Halloween character beloved by the piano-playing Linus van Pelt. Lots of people apparently still love the Great Pumpkin, as TV By The Numbers estimates 4.96 million people watched the 1966 special.

If, unlike the “Sweet Child O’ Mine” singer, you didn’t tune in on Tuesday evening, you can still catch It’s the Great Pumpkin, Charlie Brown during spooky season. The special will run again on Sunday, Oct. 27 from 7-8pm ET on ABC.

In recent years, Rose has returned to prominence on Twitter, where he has 1.25 million followers while following no accounts himself. He has become an outspoken member of the #Resistance, often lambasting President Trump and other leading Republicans, earning the nickname “Woke Axl.” He previously blasted Trump for having “no regard for truth, ethics, morals or empathy of any kind, who says what’s real is fake n’ what’s fake is real.”