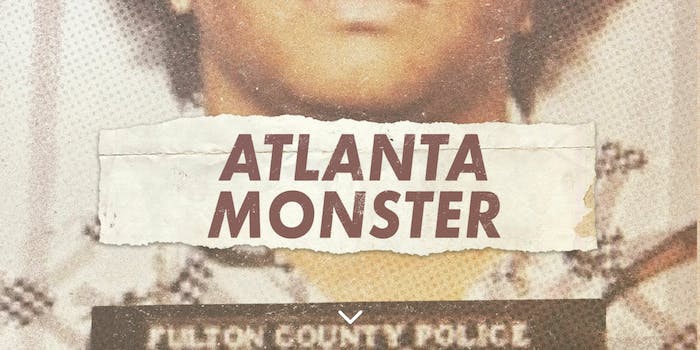 ‘Atlanta Monster’ is the ‘Serial’ successor you’ve been waiting for

For Black children growing up on the west side of Atlanta in the late ‘70s and early ‘80s, the boogie man was very real.

From 1979 to 1981, 28 children—all African-American and mostly male—were kidnapped and later found murdered in Atlanta. Terror plagued the city’s Black community for three years as police struggled to find the killer, not even sure if all the murders were related.

Despite the mass hysteria sparked by the murders—and the fact that most of them remain unsolved—it isn’t likely that young adults in 2018 have ever heard of the incident. That’s because after investigators arrested a local 23-year-old man named Wayne Williams, who was subsequently convicted of two adult murders and sentenced to two consecutive life terms, the whole ordeal was swept under the rug—despite the fact that Williams still has not been tried or convicted for a number of child murders that police have attributed to him.

That’s all about to change, however. Storytellers this year across multiple platforms aim to inform viewers and listeners about the mystery of the Atlanta murders. But while TV shows like Mindhunter season 2 and FX’s No Place Safe Plan plan to dramatize the story, one podcast hopes to actually solve it.

Veteran podcasters HowStuffWorks, along with true-crime podcasters Tenderfoot TV, launched a new series on Friday called Atlanta Monster. Helmed by Atlanta filmmaker Payne Lindsey—who also hosted Tenderfoot TV’s podcast Up and Vanished—the program plans to explore the murder mystery throughout at least 10 episodes by re-interviewing witnesses and talking to an assortment of experts and victims’ families. Lindsey told the Daily Dot they hope to answer questions and debunk misconceptions behind the murders.

Like its who-done-it predecessors including Serial and Unsolved, Atlanta Monster aims to help listeners come to their own conclusions about who did what. What separates the podcast, however, is its exploration of the complex racial and cultural issues below the surface of the story.

Producer Donald Albright warns listeners familiar with the case that the first few episodes will help those who’ve never heard of the murders catch up and explain the cultural history of Atlanta during the time period.

“This podcast is for people like us—Black, 40-plus, maybe not a typical podcast listener—but also for millennials who maybe don’t know much about the case,” he said.

The first episode explores what it was like to grow up Black in Atlanta in the 1970s and how it was different from the experiences of the white upper class. Lindsey and Albright remind listeners that 1979 was post-Vietnam and post-Civil Rights Movement and the community affected by the murders was the first to feel the benefits of desegregation. Still, tensions were high.

Lindsey interviews members of the Atlanta Black community who grew up in the city’s fourth ward, such as Calinda Lee, who’s now the vice president of historical interpretation and community partnerships at the Atlanta History Center. They provide insight into how it felt to grow up not only Black and poor but also during a period where you could be kidnapped at any moment.

“There wasn’t really a sense that anything was changing in our daily lives except that we were very afraid and our parents were very angry,” Lee said in the first episode. “Every single one of them was not only Black, they were also poor. The neighborhoods from which they were taken were the most vulnerable, most impoverished within the city… All of that definitely conspired to make folks feel like this is something that is happening to the least of us and nobody cares.”

Throughout just the first episode, Lindsey and his interviewees discuss the cultural impact of racial issues during this time period and the community sentiment that the police weren’t doing enough to help. Many believed the KKK was behind the murders and that Atlanta—which was in the process of building its tourism industry—didn’t want to publicly address it in fear that people wouldn’t want to visit.

Although the series will follow the same format as podcasts like Serial, Albright said he suspects listeners will receive it in the same way viewers received the documentary OJ: Made in America.

“The difference here [from Serial] is that this is much more than investigating a cold case or a solved case; it’s exploring Atlanta’s culture,” Albright said. “We want to show [how] it affected people in the city. It goes far beyond true crime, almost like OJ: Made In America. We don’t shy away from race relations and class and how they intersect.”

Jason Hoch from HowStuffWorks, who has been spearheading the project, said Lindsey and Albright’s work will stand out throughout the series because they don’t follow a template when it comes to storytelling.

“What’s so amazing about this medium [podcasting] is that it opens up different kinds of storytelling,” he said.

The trio acknowledges this genre in podcasting has grown significantly since Serial’s success, and they see that as a positive thing—especially for the families involved in cold cases still seeking justice.

“The thing with cold cases is that everyone involved wants to keep the case alive,” Lindsey said. “That’s why they have press conferences—it could generate a lead or a missing piece. Citizen sleuths bring about a lot more attention to the case.”

Listeners can tune in to the podcast on iTunes for free.