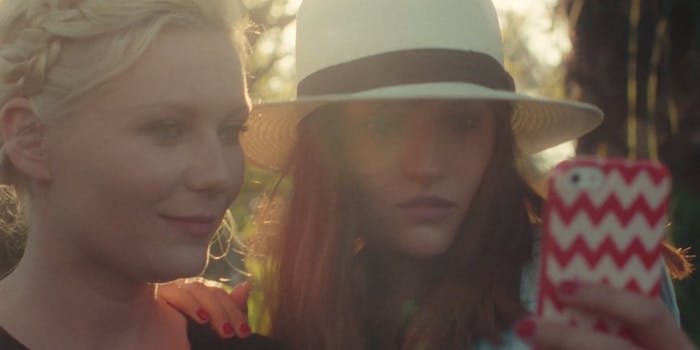 Kirsten Dunst and the price of fame in the viral age

"Aspirational" is a dark yet comedic view of celeb fame in the digital age.

Celebrities are people too.

Believe that or not, filmmaker Matthew Frost enjoys tackling the issues around the price of fame. As a creator of video shorts, the former master of the music video possesses just the right directorial touch to capture the subtle drama and humor that intersect when Kirsten Dunst and Jessica Chastain walk among mere mortals. His latest, “Aspirational,” featured in the current issue of Vs. Magazine, is a dark yet comedic view of celeb fame in the digital age as seen through the eyes of a popular actress.

What makes “Aspirational” work is Dunst’s incredulousness over a short—and perhaps all-too familiar—interaction with a pair of fans who drive by her home only to stop and gawk at the star. As she goes from trepidation to polite interaction to total bewilderment, we join Dunst on this ride that moves beyond the cynical to something sad and creepy. Two and a half minutes is not a lot of cinematic real estate, but Frost maximizes every second.

It’s worth also looking at Frost’s earlier short film featuring Chastain, star of The Help and Zero Dark Thirty. In that piece, shot to coincide with Vogue’s cover story on Chastain, the actress comes up with a clever surprise for the fan who quietly stalks her while sitting alongside on a New York park bench.

Who said Hollywood types have no sense of humor?