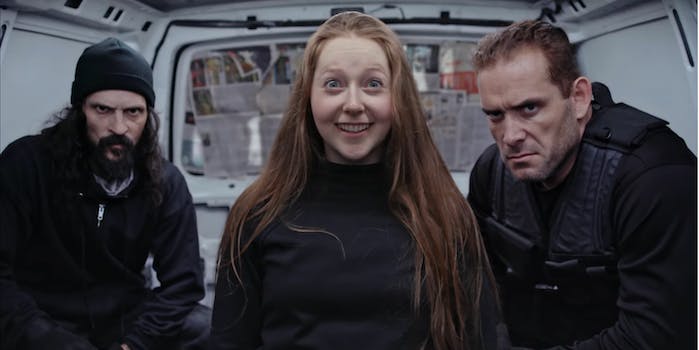 Crime can in fact be titillating.

Who said crime could never be titillating? YouTube channel Rhino Stew definitely thinks so, judging from its latest video “ASMR Bank Robbery,” which is exactly what it sounds like.

For the uninformed, ASMR is “Autonomous Sensory Meridian Response,” which is a fancy term for the pleasant sensation some (but not all) people feel when they hear certain sounds. Imagine a highly sensitive recording of someone running their nails over your scalp or gently whispering into your ear. It’s sometimes regarded as a sexual thing, but it evidently also helps people with anxiety and mental health issues, although it’s never been scientifically studied. It’s grown from a cottage industry to something much, much larger.

I’d really want to see a study after someone listens to this ASMR robbery video, though. It starts out simple enough. There’s a pleasant-sounding woman talking about some typical YouTube shenanigans in a soft voice, until she leads us out to a nondescript white van. Inside are two extras from a Die Hard knockoff, and soon they’re shooting bullets into a bank ceiling. Throughout it all, the actress maintains a delicate ASMR voice while telling citizens to “get on the motherfucking ground.”

Watch the whole thing below. But be forewarned, the video gets graphic and violent:

You’ve got to admire the creativity on display here, including every other actor speaking in ASMR voice while bullets fly. Actress Jill Galbraith (Clickbait and On the Fence) absolutely nails the role of ASMRtist.

Parks & Rec star Aubrey Plaza got into ASMR back in March, playing with her hair, rubbing feathers on a mic, and whispering in a video for W Magazine for 36 whole minutes.

The Daily Dot’s own 2 Girls 1 Podcast got into ASMR too late last year. Hosts Alli and Jen talked to Gibi, an “ASMRtist” on how she broke into tingly audio work.