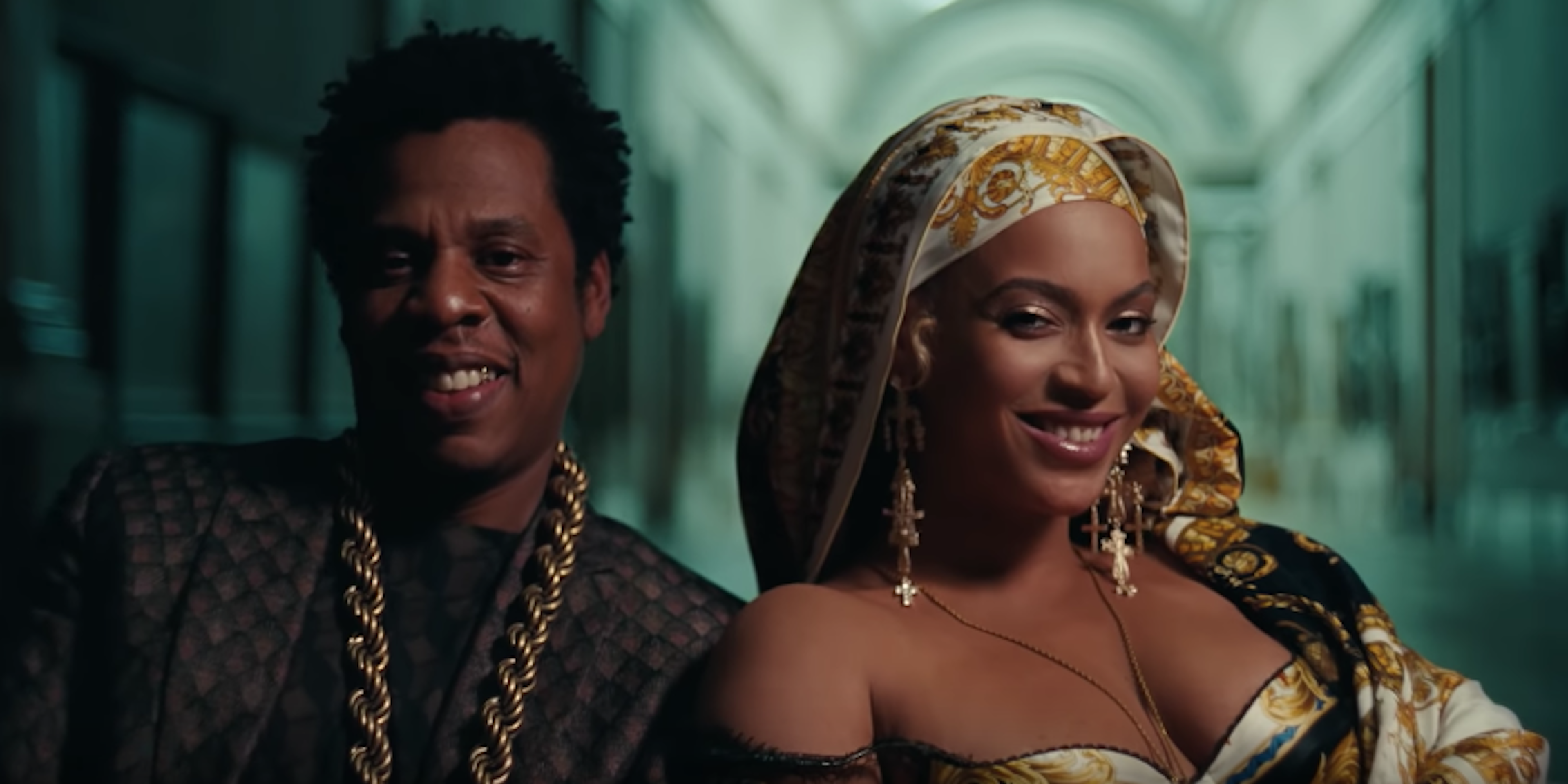 Beyoncé and Jay Z surprised the world with a new album over the weekend, plus a video for their lead single “Apeshit.”

The six-minute visual experience was filmed in Paris’ Louvre museum, which means there are plenty of recognizable works of art in the background. The Mona Lisa, an oil painting of Napoleon, and a marble statue of Greek goddess Nike are all easy enough to spot, but unless you’re an art historian, there’s probably not a ton of connection between these modern music icons and their surroundings.

That’s why Twitter user Heidi Herrera decided to put her art history degree to use and break down all of the different references and juxtapositions she could spot. It doesn’t take long into reading Herrera’s analysis for you to realize there’s very little about this video that wasn’t thoroughly planned out by the Carters and their team.

Y’all this #Apeshit video has me losing my shit. This moment right here is the fulfillment of my art history degree. Beyoncé’s vision and talent is unmatched. Stay tuned for some thoughts. #Beyoncé #EverythingIsLove pic.twitter.com/IMrVlyl6wf

Herrera starts by pointing out that centering Black bodies in a space that predominantly features art of white subjects, made by white artists, intended for white audiences is radical unto itself.

“The first shot of the duo is in front of the Mona Lisa, the most recognizable portrait in the museum,” Herrera wrote on Twitter. “People from around the world flock to the Mona Lisa to take their picture with her. Beyoncé… is visually asserting herself as Mona Lisa.”

2) The first shot of the duo is in front of the Mona Lisa, the most recognizable portrait in the museum. People from around then world flock to the Mona Lisa to take their picture with her (i.e. next image). Beyoncé (and Jay-Z I guess) is visually asserting herself as Mona Lisa. pic.twitter.com/smpysAEDyy

Herrera then goes on to explain how positioning herself next to statues of Winged Victory (Nike) and the Venus de Milo reframes the themes those statues embody and introduces the idea of “both goddesses of beauty and victory as a black woman. This dismantles white-centric ideals of beauty.”

5) Here, Beyoncé once again models herself as a Greek statue, this time the Venus de Milo. However, in this shot she wears a nude bodysuit with wrapped hair, reframing both goddesses of beauty and victory as a black woman. This dismantles white-centric ideals of beauty. pic.twitter.com/W8vRT9hoNo

One painting of Napoleon bears special significance because of the waves of imperialism and colonialism his reign ushered in worldwide.

Beyoncé, decked out in the recognizable Burberry plaid, is donning her own updated version of royal “expensive fabrics” that would have seemed high-status in a colonial context.

7) In this painting Napoleon is crowning his wife Josephine empress, a moment chosen to highlight his supposedly god-given right to rule. “I’ve got expensive fabrics” is a direct reference to the expensive clothing worn by Josephine and Napoleon for political reasons. pic.twitter.com/DoVdKVDHQX

8) Josephine is clad in fine French silks and velvets and Beyoncé is slaying in Burberry. She’s empress and Jay-Z is emperor. However, there is much more depth to that self-modeled comparison because of—you guessed it—colonialism. pic.twitter.com/WObjiu4Ct0

The sociopolitical references Herrera caught were myriad. From depictions of empowered Black femininity:

To celebrating Black love and commenting on systemic violence against Black bodies:

11) Next we see a celebration of black love in addition to black beauty. Subtext of this image is death (stab wound on chest), specifically the endemic murder of black men due to police brutality and the consistent devaluation of black lives. pic.twitter.com/d8vbMdpKrq

It’s certainly enough to make giving the video a second or fifteenth watch.

You can check out Herrera’s full thread here.