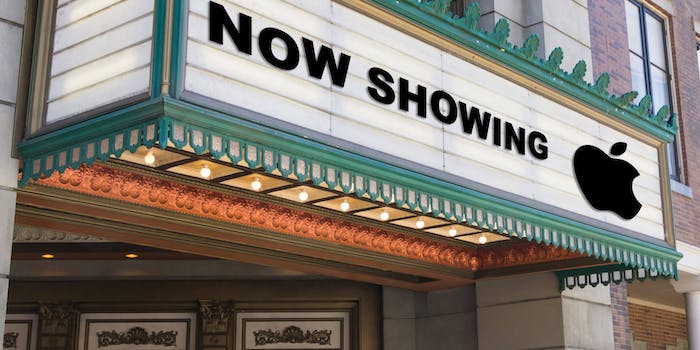 The tech giant will look to roll out films in theaters before they hit AppleTV+.

Apple will join Netflix and Amazon in bringing its films to movie theaters.

The company is looking into giving its feature films theatrical releases before they make their streaming debuts on AppleTV+, the Wall Street Journal reports.

Sources tell WSJ that Apple is consulting with cinema chains and industry executives as it firms up its plans for theatrical distribution. Part of the motivation for taking the time to develop a strategy is the pushback Netflix has received from distributors, film festivals, and creators as it has shaped its theatrical windows.

Not only does Netflix prefer so-called “day and date” release—where the film arrives in theaters and on Netflix on the same day—but when the streamer does build in an advance theatrical window, it tends to be far shorter than exhibitors would like.

Early reports indicate that some of Apple’s films will receive a traditional theatrical release while others will have shorter runs. This is similar to Amazon’s current model, which sometimes respects exhibitor wishes and negotiates shorter windows for other projects.

Apple’s first big test for its theatrical model will be Sofia Coppola’s On the Rocks. The film reunites Coppola and Bill Murray for the first time since Lost in Translation and will also feature Rashida Jones. The film is tentatively scheduled for a mid-2020 release. Lauded indie company A24 (Moonlight, Lady Bird) will produce alongside Apple, bringing its substantial theatrical experience to the table in a partnership with the tech giant.

Apple is firming up its theatrical distribution strategy ahead of the Nov. 1 launch of AppleTV+. The service will cost $4.99 a month, and you can find out everything we know about the new streamer here.