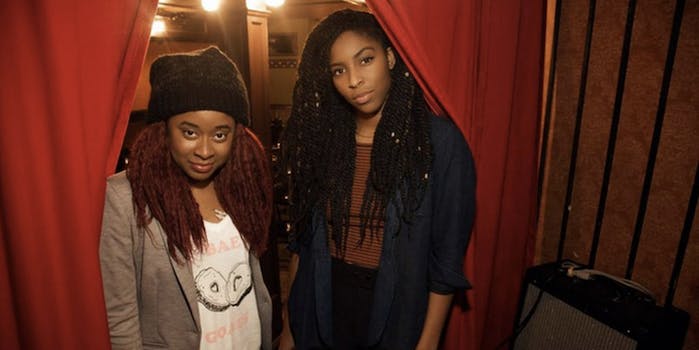 On ‘2 Dope Queens,’ Jessica Williams and Phoebe Robinson are the stars of their stories

'As a person of color, you often are the one black person in the room.'

Phoebe Robinson and Jessica Williams have undeniable chemistry and they always knew it. The two Brooklyn-based comedians eyed each other from afar while taking improv classes at the Upright Citizens Brigade and when they finally met, sparks flew.

At a Monday press briefing at WNYC studios, Robinson recalled that first friendship date with a mischievous twinkle in her eye: “It was like when—you know when you go on an awesome first date and it’s like, ‘Oh, we gonna f**k tonight.'”

While both Robinson (Broad City, The Characters) and Williams (The Daily Show) share stories of racist cab drivers in the first episode, the podcast is far from limited to discussions of race.

“The thing is, as a person of color, you often are the one black person in the room,” explained Williams. “And with our show people get to be the stars of their own stories.”

Race certainly comes up, as it is part of their stories, but their narratives and those of their guests feel expansive and rich.

“We’re main characters in our stories… We’re awkward and weird and funny and sometimes sad and sometimes happy,” said Williams. “We have this whole range. So I hope that that’s shown in this podcast and I hope that other people see that.”

“I feel like in comedy and entertainment it’s always like, ‘Well, where are the black women? Where are the gay people?'” Robinson added. “And it’s like, you’re not looking. They’re everywhere. You’re choosing not to see us.”

Robinson added, “I think with this platform it’s like, ‘Hello.‘ You’re going to see Naomi Ekperigin, who’s a writer on Broad City. You’re going to see Michelle Buteau, who’s been doing standup for so long… You’re going to see very distinct and diverse voices that people aren’t paying attention to for no other reason than that they’re lazy… But hopefully we’ll motivate them to… look outside of [their] narrow view of the world and put other people in shows.”