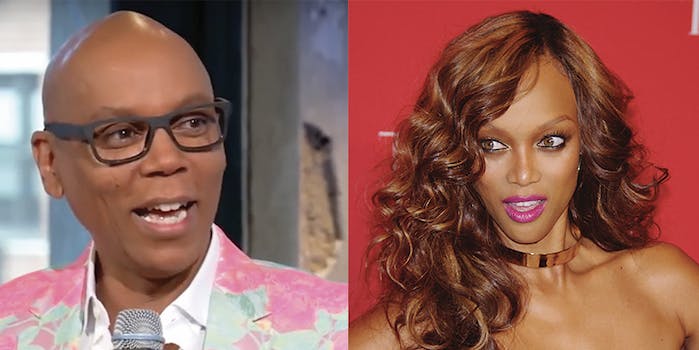 In an answer to every gay reality TV fan’s prayers, the upcoming season of America’s Next Top Model—with Tyra reclaiming her rightful host position from boring Rita Ora—will include appearances from RuPaul’s Drag Race favorites.

ANTM moved to VH1 in 2016, and Drag Race moved from LOGO to VH1 this year for its 10th season, finally allowing for a long-overdue collaboration between two of the gayest shows on television.

It’s unclear what, exactly, the queens will do on the show. If it’s anything like previous celebrity cameos on ANTM, they’ll appear for exactly three minutes before a challenge that’s vaguely related to modeling. But who cares!

“They’re so friggin’ gorgeous and can pose their asses off,” Banks said of the queens. “That’s a difficult model to be in a shot with… Not all of my models prevailed. Valentina killed it. I’m sitting there editing film and I’m like, can I get a shot of my girls looking at least half as good as Valentina?”

Valentina, of course, is the so-called snake and “fan favorite” from Drag Race season 9, whose “I’d like to keep it on, please” mask stunt during a lip sync stunned pretty much everyone.

But she is beautiful. And there’s plenty of charisma, uniqueness, nerve, and talent to expect from the other queens gracing ANTM with their presence. Luzon is known for her googly-eyed lip syncs. Zamolodchikova, who has a show on Viceland alongside Trixie Mattel, is a human pretzel with a sense of humor darker than her soul.

We hope the upcoming collaboration has all the magic of that time Drag Race season 3 winner Raja (whose real name is Sutan Amrull) appeared on ANTM—as Banks.