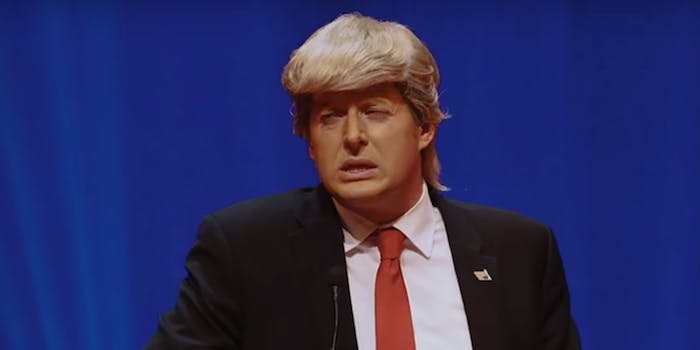 To craft the perfect Trump impression, Anthony Atamanuik had to get in his head

'The show has evolved to become a rebuke of him, a disappointment in him.'

If you were sitting in an audience and a person who appeared to be Donald Trump took the stage, would you cheer or clap? Would you boo? What about when this Trump starts declaring terrible things, either drawn verbatim from Trump speeches or taken to a logical Trumponian end?

You might find yourself in this position when watching actor and comedian Anthony Atamanuik perform as the presumptive Republican presidential nominee. And as someone who has witnessed this impressive impersonation on two occasions—first during his Trump vs Bernie tour with fellow actor and comedian James Adomian and second at his Trump Dump show at the Moontower Comedy & Oddity Fest in Austin, Texas, last month—I can assure you this moral and comedic quandary never quite goes away.

For Atamanuik, the reality of a Trump nomination and possible presidency was always within sight. Performing to audiences as Trump since August, Atamanuik has gradually evolved his impression from an improv show at an Upright Citizens Brigade theater in New York City—where he performs and teaches—to one that exudes nuance amid the signature Trump bluster. The fact that he can pull off this parody when Trump is already seen as a parody of himself is remarkable.

Atamanuik, who watches the newly minted politician perform his political theater every day, used to have a slight bit of affection for the reality show star, who he initially perceived as a buffoon. But as the possibility of a Trump nomination has continued to solidify under the guise of unapologetic xenophobia and tribalism, he now feels like his performance must exist almost as an anathema to the idea of a Trump presidency.

“The show has evolved to become a rebuke of him, a disappointment in him,” he tells the Daily Dot.

One major source of inspiration for Atamanuik’s conception of Trump is Charlie Chaplin’s character in The Great Dictator.

“That was a very brave and surreal thing [Chaplin] did back in the day,” he explains. “Let’s take this ugly, hateful image, this thing that’s horrifying and frightening to people, and let’s speak through that vessel with honest language that’s not really attached to character. So that became a part of the show, too—speaking with my own voice but through Trump to show the absurdity of it and to defang it. I think the brilliant thing that Chaplin did was he took the image and he changed the symbol somewhat. He changed the symbol of Hitler because he had this character speaking lovingly and as this grotesque person.”

In order to properly formulate a Trump who exists as anti-Trump, Atamanuik’s ability to empathize with the man and his supporters is an important point of entry. The key is not dismissing them as “monsters,” but understanding them. It is within this grey area of avoiding easy, reactive binaries, where opposites overlap and constructive ideas can be formulated, that good art tends to find a nuanced voice and becomes a method of inquiry.

“I have empathy for those people—they’re lost and they’re consumed with xenophobic, tribalistic hate,” Atamanuik says, explaining how the job economy and lack of a social safety net has marginalized large groups of people across race, gender, and class. “It’s every man for himself in this country and that is really sad. And it’s a very large, hateful group of people and it’s sad because those people, and I really believe this, that if you want to change your enemy, you have to love your enemy. We can’t hate them. You have to love them. Love is empathy and empathy does not mean I endorse who they are.

“I mean, I’m a Jew. I can take it to Adolf Hitler… It doesn’t mean I endorse him, but I can understand he’s a human being and that something took him to that place. You’re way better off in that space than in believing people are monsters because when you believe they’re monsters you remove the humanity from them and that’s how you get into situations where you have monsters running the country.”

To truly access the Trump way of thinking and being, Atamanuik had to dig deep into himself to discover how he and Trump are alike—something that hasn’t been easy.

“I think I can bloviate, as evidenced through this interview,” he says. “So I can run at the mouth. I want to be approved of and loved by the audience. I have a deep sense of unfairness when I think things are unfair. When people react to me poorly, I want to kick them out of the audience. And I think we’re similar because I imagine he can work a room really well, and I think he’s got a very sharp, wry sense of humor. We probably have very similar personality Venn diagrams. The difference is that I have a reflective self and he has no reflective self.”

There were moments during the Trump vs Bernie tour when it got really dark, he explains: “It affects you because you’re thinking in his head and that level of aggression for that long is taxing.”

But from this point of access, the comedian has been able to see Trump more clearly than Trump might see himself. If he lacks a reflective self, then Trump is only as good as his audiences’ approval. The nonsense and bluster he sputters obviously fills a hole, one of anger, frustration, and rash decision-making.

According to Atamanuik, an uneasy feeling exists among the crowd at a Trump rally. “I’ve never seen people cheer and have dead, frowning faces,” he says of a rally he attended in Manchester, New Hampshire. “People cheering, but yet no happiness. Pure anger.”

In his performances, he attempts to cultivate a similar air of discomfort and fear. “I enjoy making it feel like it’s almost real,” he says. “It should be immersive and absurd but to the point that the absurdity is real. … It’s incumbent upon me when I’m doing the show to make that point, that this is a for-real dangerous guy.”

During the Trump Dump performance, I watched as his Trump chastised a couple for leaving the theater, saying he wished they got shot outside. About 30 minutes later, I had to pee really bad, and even though I wasn’t very close to the stage, I was petrified to make a move—I didn’t want him yelling at me, even though it was all part of the show.

Atamanuik relishes the discomfort of the audience and uses it to feed into the Trump persona while also taking the opportunity to say things that he really feels, like shaming an audience member for using his phone during the performance. He channels the frustrations we have and uses humor not to cope with or escape reality, but to delve deeper into it and expose its potential threat while asking audience members to recognize their accountability. In one bit from a recent Fusion special, he discusses his idea for an alternate energy source—white power.

Fake Trump holds nothing back when exposing who the real Trump is and how we’ve all been complicit in his “success.” In another bit, he thanks the media for creating him and providing $1 billion in free advertising for his campaign.

“I have had $1 billion of free advertising when people cover my rallies, my incredible rallies, and they’re so much fun,” he says in the special. “And they’ve gotten even more fun and the media loves that, you know, it’s more fun when we think that someone might get beat up, right? And what a great image on-screen. We have black people getting dragged out of my rallies and beaten and the white news media just creaming all over it on camera, right? Absolutely wonderful. What a group of collaborators they’ve been. And what’s been so amazing about them is their constant surprise at who I am. It’s as if they’re a dog and you went on vacation and came back and they think you’re a new owner. That is the media. That is the media.”

As a member of the media, it’s hard not to feel guilty about giving Trump more coverage. Even if it’s through a profile of a different person. Atamanuik feels this ambivalence, too.

“It does feel a little bit like a deal with the devil,” he explains on Inside Joke. “I’ve made more money, just at a base level… playing him, so then you wonder, does he have, like, a magic power? If you just play him, do you make money? If you get a shot at doing this where you have an opportunity to maybe change the view of… a dangerous person running for president, and you could do it through comedy, then why not do it and have fun?”

If people are paying attention to Trump, chances are they’ll pay attention to a fake Trump and perhaps this performance could sway perceptions of the candidate. Atamanuik confirms that Trump supporters have attended his shows and told him that he’s changed their minds about Trump, though he doesn’t win them all over.

Through this vessel, Atamanuik uses the candidate’s messages to agitate and give permission for people to explore the truth of our country’s circumstance. Just like the real Trump, Atamanuik’s version takes viewers through waves of offense, strange delight, embarrassment, disgust, and amusement—all to underscore the frustration and terror at the state of things. Ultimately, Atamanuik’s Trump is a character and political analysis: It’s not simply him talking and acting like Trump.

Atamanuik has journeyed to the heart of the matter and returned with a message and warning, in the form of a poem that he reads at the end of his performance. In it, he appeals:

You, depart from Plato’s cave
Stop screaming silent at the shadows on the wall
Agitate me
Disrupt me
Save me
From myself

And what does “saving” Donald Trump look like to Anthony Atamanuik?

“My utopian view is… put him back on TV, let him be inflated in a way that’s not affecting other people to the degree he would as president,” he explains.

Perhaps he’s on to something. Maybe that’s all his ego needs. And maybe Trump is the best defense we have against Trump.

The next Trump vs Bernie debate airs May 11 on Fusion.