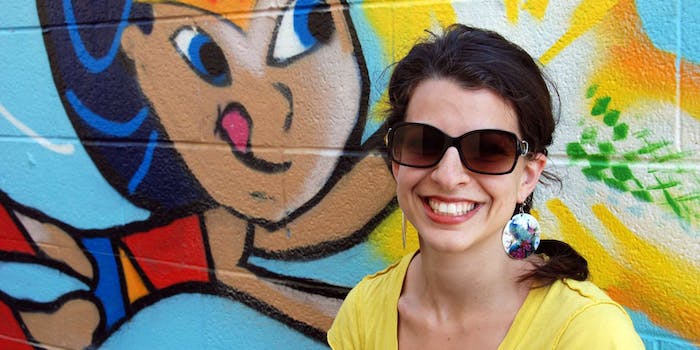 How Anita Sarkeesian earned her spot on the Time 100 list

Sarkeesian’s courage in the face of adversity is absolutely inspirational.

Anita Sarkeesian is changing the world, and no one—especially an army of cowardly Internet trolls—is going to stop her.

The creator of the webseries turned nonprofit Feminist Frequency, Sarkeesian is one of the most controversial creators on YouTube. An avid gamer herself, Sarkeesian’s videos explore the unflattering and sexist representations of women in pop culture, as well as the overwhelming harassment endured by women in the tech and gaming industries. Since starting her channel in 2009, the harassment against Sarkeesian has been relentless, with threats of violence, rape, sexual assault, and death bombarding her social media accounts and YouTube videos every single day. Last year, Sarkeesian was even forced to leave her home after threats exposing her home address were made against her and her family.

But Sarkeesian is not backing down, and neither are her loyal fans.

This past year, Sarkeesian set out to raise $6,000 in order to create a new series called Tropes vs. Women in Video Games. The Kickstarter project raised close to $160,000, showing just how much audiences wanted to see more educational content being made around sexism, homophobia, and racism. The series has since gone on to be a major success, with each video garnering between 800,000 and 2 million views. The topics range from dissecting the damsel in distress trope to discussing the danger of turning violence against women into a sport, and each video is packed with endless amounts of research and diverse examples. The videos are even being used as educational materials in high schools and universities around the country, and this particular series contributed largely to Sarkeesian making the Time 100 list of the most influential people of 2015.

And she deserves every bit of this success.

(Think otherwise? Get the hell out of my article.)

Although her conviction to make the gaming world more inclusive has never wavered, Sarkeesian recently shared at the All About Women 2015 conference that she does grow tired of her life always being under a microscope.

“I’m angry that we live in a society where online harassment is tolerated, accepted, and excused. … I’m angry that I am expected to accept online harassment at the price of being a woman with an opinion,” Sarkeesian said. “Women who persevere and retain some measure of their humanity are not expressing weakness; they’re demonstrating courage.”

Sarkeesian’s courage in the face of adversity is not only inspirational but has also become an example for women to look to during their own moments of doubt. Her conviction to breaking the silence around the misogyny in the gaming world has made her highly regarded as a media critic and given her the opportunity to host her own TEDx talk as well as speak at universities and conventions around the world. But in my opinion, Wil Wheaton puts it best in the profile he wrote for Time on Sarkeesian:

“A lesser person may throw up her hands and unplug her game console, but Anita is determined to ensure that video games are inclusive and representative of everyone who plays them. As her detractors grow increasingly unhinged, we have proof that her efforts are working.”

So, Anita Sarkeesian, keep moving forward, and know that I, and million of others, are right behind you.