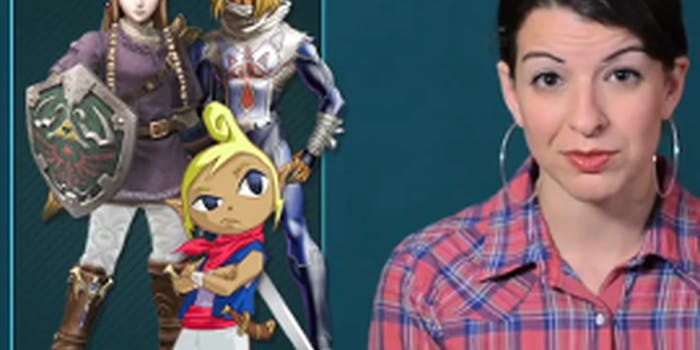 This time, the Feminist Frequency creator and pop culture critic is releasing videos with comments and ratings disabled.

After nine months of international headlines and endless harassment, Feminist Frequency creator and pop culture critic Anita Sarkeesian has finally presented the first video of Tropes vs. Women in Video Games, her series of Web videos analyzing and deconstructing the underlying sexism in games, the gaming industry, and gaming culture.

The long-awaited series debuted Part 1: Damsel in Distress yesterday on YouTube. Although Sarkeesian came under fire for supposedly being high-handed about what she was doing with the $150,000 she raised on Kickstarter, it’s easy to see where the money has gone. At 23 minutes, the video is nearly three times longer than most of her other Tropes vs. Women videos, and features rare clips from lost games like Dinosaur Planet as well as footage from films like Popeye and King Kong explaining the “damsel in distress” trope.

Sarkeesian pulls no punches, setting us up briefly for the history of the trope and then launching into a look at the way the series has played out over the years in gaming, from Donkey Kong to Dragon Lair. She calls Super Mario‘s Princess Peach the “quintessential stock-character version of a damsel in distress,” referring to her as a kind of “damsel-ball” who gets tossed back and forth between heroes and villains who vie for possession of her throughout the Mario franchise.

She also points out that Peach gets kidnapped in 13 out of the 14 games in the main Mario storyline, and is only a playable character in one of them. Zelda, the titular princess in the popular Legend of Zelda franchise, fares a little better: At least she gets to assume a more active role in later games, though the story is still all about her rescuer, Link.

“Willst thou get the girl? Or play like one?” challenges an old ad for the Zelda franchise.

Sarkeesian reminds viewers from the start that learning how to balance their love for the narratives they enjoy with an awareness of their flawed and harmful elements is an essential part of being a critical thinker. But not everyone agrees that thinking critically is the way to go.

Although the gaming industry annually rakes in over $100 billion worldwide, women have largely been shut out both of its narratives and its gaming communities. Attempts to change the status quo have led to an ongoing spate of resentment and backlash from all corners of gaming culture, from sexist industry-hiring videos to the rebellion against the so-called fake geek girl.

And no one has taken the brunt of this resentment more squarely than Sarkeesian. Last fall, TED was forced to disable comments for a talk Sarkeesian gave about the harassment she’d experienced: The video’s comments were flooded with—what else?—misogyny and threats. Ironically, her talk focused on the fact that being the subject of so much ongoing harassment ever since she launched her Kickstarter for the video-game project had only made her more determined to do her work.

But this time, she’s doing it with comments and ratings disabled.

“The belief that women are somehow a naturally weaker gender is a deeply ingrained, socially constructed myth,” she states in the video, which sticks largely to the incredibly popular Mario and Zelda Nintendo franchises for its first time out.

This is a smart tactic: these old-school games are popular even with non-gamers, and using universally popular series to make her points from the start makes it easier for her to challenge other, more modern series that target male audiences more specifically.

Sarkeesian has also released a Tumblr, Bits of Tropes vs. Women, where she showcases additional examples of her current video and previews her upcoming work in the series. If the Tumblr is any indication, we may not have to wait another 9 months for the next installment.

Unfortunately, that means the inevitable backlash over Sarkeesian’s work will be returning soon, as well.

Disclosure: the author of this article has been a regular contributor to Anita Sarkeesian’s Feminist Frequency website since 2011.