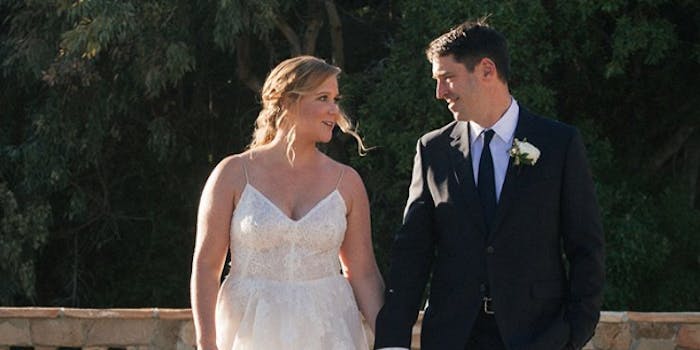 She is asking for Everytown donations instead of gifts.

The pair were reportedly married in a private, 80-person ceremony Tuesday, with guests like Jennifer Lawrence, Larry David, Jennifer Aniston, and Jake Gyllenhaal in attendance. Everyone involved with the festivities kept their lips sealed, though, because news of the nuptials didn’t break until Schumer shared a small wedding album on Instagram Thursday.

“Yup,” was the simple caption the Trainwreck star offered.

The groom is a farmer and chef from Martha’s Vineyard, and also happens to be the brother of Schumer’s personal assistant.

For her part, Schumer seems to have pulled off the ultimate celebrity feat and had a serious relationship right under the media’s noses. According to People, the comedian had only been spotted out with her now-husband twice: Once at a taping of SNL, and once at a restaurant. It was a relationship so new in the tabloids’ eyes that, when Schumer posted a pic of herself kissing Fischer at Ellen De Generes’ 60th birthday party this past weekend, people wrote about it finally “being official.” Things are certainly more official now.

In a second Instagram post, Schumer clarified that she isn’t pregnant, and asked fans to consider donating to gun violence non-profit Everytown for Gun Safety instead of sending gifts.

No gifts but consider a donation to @everytown

Combatting gun violence has been a cause close to Schumer’s heart ever since a 2015 shooting at a screening of her movie Trainwreck left two dead. With the Stoneman school shooting in Florida this week, Schumer wrote that the victims have been on her mind “a lot,” and seems to be hoping her influx of wedding clicks might go to a good cause.