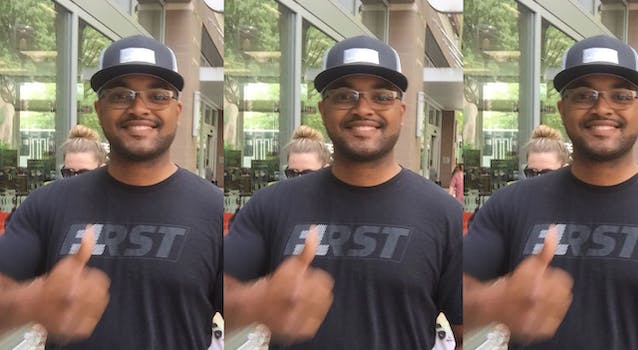 'This dude in Greenville' almost cost the internet our future Amy Schumer selfies.

Over the last year, Amy Schumer has taught us that fame is hard—and not in that “Lucky” by Britney Spears type of way. She’s faced criticism over her film Trainwreck not being feminist enough, been accused of joke theft, and was shockingly body-shamed by Glamour.

Unfortunately, it appears that yet another distinction has been added to Schumer’s list of travails. The comedian shared a photo on Instagram on Saturday depicting a fan who attempted to take a photo with her in Greenville, South Carolina. This starstruck encounter was apparently far from harmless, however.

According to Schumer, the fan “scared the shit out of” her. She asked him repeatedly to stop taking photos and yet he wouldn’t. His reasoning? “It’s America and we paid for you”—a rather puzzling reply to someone politely asks you to respect their privacy and personal space.

“I will not take picture [sic] with people anymore and it’s because of this dude in Greenville,” Schumer continued in the caption, to which the Internet panicked and freaked out a little. Fellow Schumer fans responded supportively but also had questions. Who is this guy? And why should he be the one to ruin any random future encounters with Schumer?

Three hours after posting the photo, those same fans were able to breathe a sigh of relief. Schumer took to Twitter to thank fans for their support and backtrack a bit from her original reaction.

Thanks for the kind words and support. I know there are bigger problems in the world. But this was not right pic.twitter.com/8fqoIm7sHC

“I’ll still take pictures with nice people if I choose to if Its [sic] a good time for that,” Schumer wrote in a note that she included with the tweet. “But I don’t owe you anything. So don’t take [offense] if I say no.”