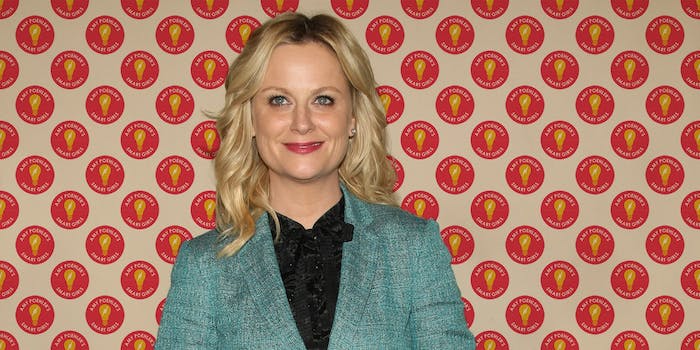 How Amy Poehler became a mentor to the teen Internet

These are the Smart Girls at the Party.

Outside of Banger’s, a Rainey Street pub in Austin, Texas, a teen marimba group tears through a rendition of “Hey Jude.” The audience provides the swaying chorus, and girls dance around, kicking up beige gusts of sand. Others sit in semicircles, wordless, absorbing the sight of three young women plucking ecstatic sounds from their instruments.

A young girl who looks to be no more than 5 or 6 stands next to her mom, entranced. “That was the Beatles,” the mother says when the song ends. “I know,” she responds.

These are the Smart Girls at the Party, and this physical gathering at South by Southwest is an extension of a community that’s grown online in the past seven years.

Amy Poehler is both the name and face of Smart Girls at the Party, a video series that focuses on encouraging young women (and men) to be and express themselves. She gives advice, interviews notable women and girls, and serves as a conduit for the community.

Meredith Walker is the other arm of this operation, the Austin-based face behind the scenes making sure the party keeps going. In her new book, Yes Please, Poehler recalls meeting Walker: “She was tall and from Texas and had already met Sting and Tupac.”

“It wasn’t like we set out to start a business together,” Walker told the Daily Dot. “We were just talking one night, drinking wine, and we ended up talking about our adolescence and what part of that fit into who we were now. And part of that conversation was just about how that’s such a rough time of life, no matter if you’re the mean girl or the girl who they’re mean to or you’re a loner. No matter what, that’s a tough time because of the biology of adolescence.

Smart Girls was born around 2007, but Walker met Poehler back when they were both at Saturday Night Live, Poehler as a performer and Walker as a producer. She was there when Poehler got her audition with Lorne Michaels at 1 in the morning.

“It’s so intense, and there’s just so much sitting-around time,” Walker explained of her time there during the early aughts. “Between anthrax and the brownout and 9/11, there’s so many intense experiences; it’s like being in a foxhole. So we just became super inseparable.”

Walker left SNL in 2002 before ending up in L.A. and eventually in Austin, where Smart Girls blossomed into a YouTube series in 2008. In Yes Please, Poehler describes wanting Smart Girls to be like a “Charlie Rose-type interview show for girls that ended in a spontaneous dance party.”

“We remembered very much how older girls paying attention to us sort of broke the spell,” Walker said. “We thought, ‘What if we could be that surrogate older girl for people in some way?’ So we ended up just starting with the show, Smart Girls at the Party.”

In the seven years since, Smart Girls has grown from a webseries to a hive mind. The site features notable guests like Amber Tamblyn, Mara Wilson, Holland Taylor, and Jazz Jennings, an advocate for transgender youth. But Poehler’s presence is heavy: The clip of her interviewing comedy icon Irma Kalish is truly a delight, and the Ask Amy series features Poehler answering questions about love, anxiety, and adolescence. In many of the videos, you can tell it’s probably late and her kids are asleep and she’s tired but still wants to get a video out. (Elsewhere, she’s getting one in before hosting the Golden Globes.) Many of the segments do indeed end with a dance party.

In the seven years since, Poehler’s show Parks and Recreation has also became a pop-culture force and drawn in a new generation of admirers. She’s also the executive producer of Broad City, a wildly popular Comedy Central show that started as a webseries, as well as Julie Klausner and Billy Eichner’s upcoming Hulu show, Difficult People.

“Amy spotted them a long time ago,” Walker said of Broad City’s Abbi and Ilana. “Those girls are such prime examples of smart girls.”

Poehler sees the evolution. “We wanted to make a show that celebrated young girls and ended in a dance party,” she told the Daily Dot. “Now it’s growing into a conscious network. An antidote to all the gross stuff on the Internet. A community of girls and boys and men and women who are looking to laugh and share and create change.”

And then there’s the Smart Girls ripple effect: Ruby Karp, who appeared on the show in 2012, has given a TED Talk and writes for Hello Giggles. Austin musician Jendayi Bonds, who also appeared on the site in 2012, was recently featured in the Guardian and Rookie.

Walker explains they don’t just want people “on their screens.” They want to start programs in schools and extend camps to cities outside Austin and make it a “real-world experience.” She’s also mindful of tone. “We don’t want to say, ‘You have to’ or ‘You better be,’” Walker said.

Smart Girls has always felt like the foundation for something bigger. Last fall, Legendary Entertainment acquired the site, which joined YouTube channel Geek & Sundry, run by Felicia Day, and Nerdist Industries, helmed by the affable Chris Hardwick. Those are two big names in geek culture, and Poehler makes it a pretty impressive trinity.

Legendary, hoping to grow its digital arm, will be partnering with Smart Girls for about four or five years. Walker explains that under Legendary, they hope to “groom” girls to be the face of Smart Girls. They’ll be both in front of the camera and behind the scenes, creating “responsible media.” Walker says they eventually want Smart Girls to land on TV.

“The future for digital content is in—in a sense—creating these branded channels with a really dedicated audience that can be engaged,” he said. “We can go back and forth with feedback [and] create original programming for those audiences.”

Nerdist, aimed at an 18- to 34-year-old demographic, proved a successful template: Hardwick has parlayed his brand into social media game show @Midnight and Walking Dead aftershow The Talking Dead, two series that involve fans on an interactive level. Geek & Sundry has seen success with Tabletop, a gaming webseries hosted by Wil Wheaton. With last year’s acquisitions of Geek & Sundry and Smart Girls, Legendary’s trying to shape a more diverse lineup, Rymer says. “It’s a cable TV model with multiple branded channels,” one aimed at a 15-45 demo.

“We’re very fortunate to live in a time when a lot of things we’re excited about are increasingly female-skewing, even though they tend to be historically sort of male-oriented,” he said. “So Nerdist is definitely male-skewing, but not extremely. It’s like a 65/35 split. Geek & Sundry is a little closer to 50/50. And Smart Girls is more along the lines, I think, of 70/30 female.”

Poehler says we can expect “the perfect combination of the serious and silly” from the Legendary partnership. “Mostly comedy at first, but also how-to programs and mini-docs. We’ve always said our content is deceivingly educational, but its goal is to always make people laugh and connect.” Rymer adds that having a known face with each channel is a “very meaningful component to connecting with the audience.”

“I don’t know if you’ve watched any of the advertising on the Super Bowl over the last couple of years,” Rymer said, “but you see these movements coming about to empower a generation, both male and female, and the whole notion of ‘be yourself’ is important right now, in a world where there’s so much information about you out here and it’s so easy to get caught up in trying to fit in one way or another. I think the message that Smart Girls delivers is more important now than it ever has been, especially when it’s a two-way message.”

There’s a lot of potential in the Legendary partnership—and in crossover with Geek & Sundry and Nerdist. Smart Girls will have to evolve, but here’s hoping it’ll always save room for the dance party.

Photo via Peabody Awards/Flickr (CC BY 2.0) | Remix by Jason Reed