K-pop’s female idol aesthetic is a fairly recognizable one: ultra-slender women with impossibly long legs and tiny waists, shining hair, and coquettish expressions. When someone like Amber Liu emerges within that world, people notice.

Liu foregoes the long hair and feminine blunt-cut bangs in favor of a short, ear-grazing bowl cut. She wears her now-typical garb to our KCON Los Angeles interview: A baggy yellow T-shirt emblazoned with a photo of Kurt Cobain smoking in his signature white sunglasses, oversized jeans with rips, and white high-top sneakers. Her voice is an octave or two lower than you’d expect, with a wonderful earthiness. 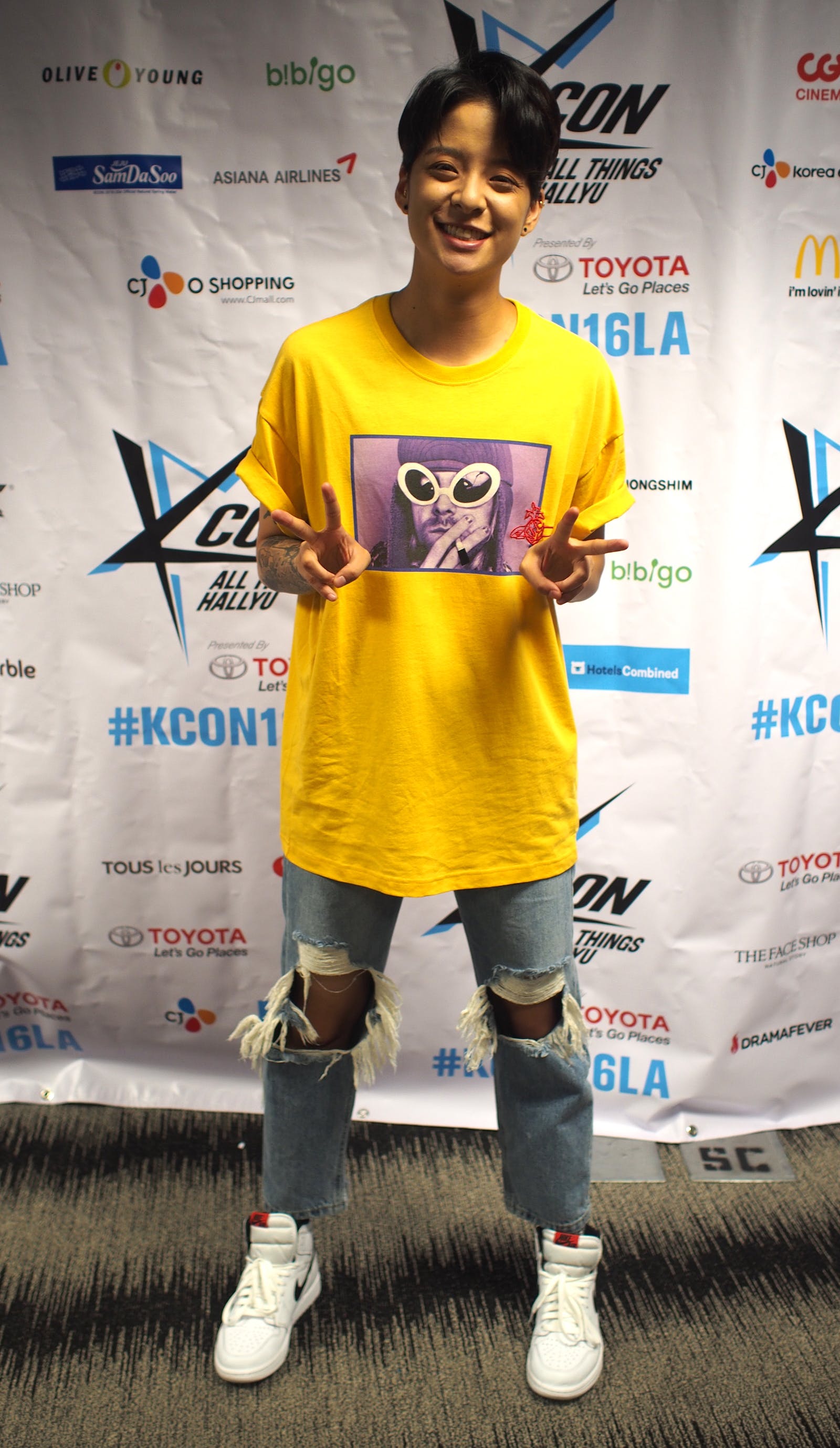 Liu is notable in the K-pop industry not just for eschewing that stereotypical look, but more significantly for her attitude about it. While Liu has never clarified her sexual identity publicly, she is certainly clear on one thing—sending a strong message to fans to be who they are.

It’s hard not to fall in love with Amber in person. Her fearless nature is clearly etched down her slender arms in intricate tattoo work (tattoos are frowned upon in South Korean society). Unlike many other celebs, there’s no invisible partition when you sit down with her. It could be because Liu went about entering the K-pop industry unconventionally, moving to Korea in 2008 after being born and raised in Los Angeles. Liu did so by winning a coveted spot in S.M. Entertainment’s Los Angeles global auditions when she was just 16 years old, beating out hundreds of other eager participants.

Liu was added to the roster of all-girl K-pop group f(x) in 2009. Her style always stuck out: short, styled hair when everyone else’s was long; pants or baggy shorts rather than short skirts. In her early days she was often mistaken for a man by Korean audiences, something Liu laughed off over and over. Instead she focused on making great music, writing songs starting in 2012 to define f(x)’s signature electro dance sound.

Rather than back off and change her appearance to settle South Korean concerns, she continued to embrace it.

After seven years with f(x), Liu announced her debut solo album, Beautiful. The B-side track, written and composed by Liu, slowed the beat in comparison to her past work and expressed vulnerability and sadness—speaking of “hurtful words that cut deeply into my heart.” However, the song ends with Liu singing softly, “I’m just happy to be myself.” Even the music itself seems more contemplative, trading catchy beats for strings and putting Liu’s voice in the spotlight.

Liu’s solo work addresses topics rarely seen in the genre and focuses heavily on self-acceptance and vulnerability. She says that her music is also about being open-minded.

“Instead of trying to group people into something and have this one assumption, get to know someone for who they are,” she says. “I guess a lot of people are really lazy to start getting to know people or make that effort? Or scared? I think we should let our guards down a little bit more. I think we should respect our differences, because that’s what makes us all awesome and unique.”

During late July’s KCON L.A. performance of her first English single, “Borders,” Liu encouraged the audience, telling them not to give up on their dreams. Liu’s earnest platitudes are downright profound relative to a landscape of perfectly polished idols.

“I felt really compelled to say something because I think there’s a lot of people out there struggling and they obviously want to hide it, because that’s who we all are,” she says. “We just want to hide all that. I think often people want to put something on me, or something on you, and bring you down. You know what, believe in yourself and you can do it. Hopefully, I’m an example. Because I tried really hard and now it’s possible.”

Both in her lyrics and in person, Liu makes it clear that not only does she have flaws, but they are an integral part of what makes her an artist.

“I think, in the end, I’m human just like anybody else. I’m sad a lot too. Who isn’t?” she says. “You know the Pixar movie Inside Out? The reason why sadness was such an important character was because it’s crucial to the deep talks and empathy between people.”

Liu believes in this connection with fans too, saying she wants people to know that there’s much more to her than just the images plastered across TV.

“People assume a lot about me. Some people come up and think I’m hard,” she says, a smile ghosting across her lips. “I’m actually very, very shy. I’m bubbly in the right circumstances. But I’m a big introvert. I’m an extroverted introvert.”

She mentions that she was recently inspired by Blink-182’s latest album, California, which features 30-second songs sandwiched between longer ones.

“And I was like, I love this!” Liu says. “That’s something I might want to do later on. Because I love Blink-182. Their new album is so fire.”

Whatever Liu does next, she’ll continue to pursue it with the same enthusiasm that she has exhibited throughout her career. As she’s ushered out the door to host a concert showcase, she happily plops in front of a KCON banner when asked for her photo, as if she has no better place to be.

“You can take five billion,” she says, smiling.

Editor’s note: This post has been updated to remove an out-of-context reference to actor Hong Seok-cheon.