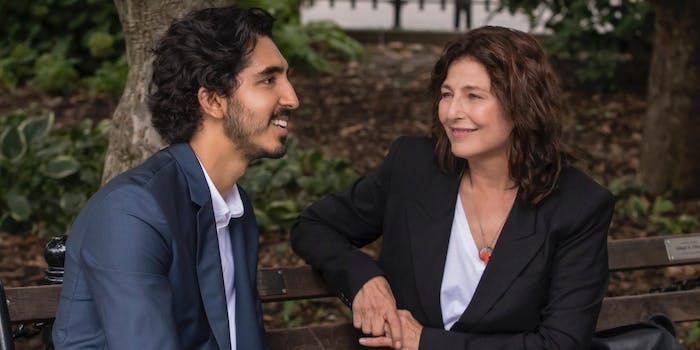 Amazon’s ‘Modern Love’ adaptation feels like an ad for love

Amazon Prime’s Modern Love anthology series is predictably sentimental, offering snippets of different love stories in each of its eight episodes. Some of these episodes feel like half-formed romantic comedies, while others show more potential. As a whole, the series doesn’t offer quite the same emotional impact as the New York Times column of the same name on which it is based.

Modern Love features an amazing cast including Catherine Keener, Dev Patel, Anne Hathaway, Tina Fey, Andrew Scott, Cristin Milioti, and John Slattery, to name a few. Yet despite the array of talent and strong source material, Modern Love often feels like an advertisement for love, or a commercial that uses love to sell an expensive product at the end, like a sports car or a watch. The series is both helped and limited by the Times columns from which it pulls its stories. The columns provide structure and characters, yet the show tweaks all of the original stories—and tacks a Hollywood ending onto some of them. The best episodes are the ones that don’t overly romanticize the stories.

In “Take Me As I Am, Whoever I Am,” Hathaway plays Lexi, a bipolar woman trying to navigate her personal life alongside unpredictable mood swings. Her “up” days are illustrated through scenes that feel like musicals. People sing and dance in the background, and everything appears brighter. On her “down” days, Lexi is immobile and doesn’t want to leave her bed. Hathaway, who has played a range of both cheerful and melancholic characters throughout her career, realistically captures what depression looks like. Since the episode focuses on Lexi’s mental health rather than a happy ending, it’s less gimmicky than others. I wanted to watch Hathaway’s character in an entire series, not just one episode.

The episode featuring Patel and Keener, “When Cupid Is a Prying Journalist,” hews more closely to a typical rom-com plot. It’s based on the true story of Hinge CEO Justin McLeod reuniting with an ex-girlfriend, thanks to some advice from the journalist interviewing him for a profile. Patel plays the creator of a fictional dating app, while Keener plays the journalist. The episode shows gets off to a promising start, mostly because of the power combination of Patel and Keener. But it quickly morphs into a cliche of a romantic comedy, complete with a “meet-cute” at a job interview and a woman reading how her ex feels about her in a magazine article, à la How to Lose a Guy in 10 Days. The true story of how McLeod reconnected with his now-wife is interesting on its own, and it didn’t need Hollywood embellishments. The episode also oddly inserts a cheating subplot into McLeod’s love story, which didn’t happen in real life.

All the Modern Love episodes are named after the original column headlines. This makes it easy to compare the real stories to the adaptations, but it also reveals how much unnecessary fluff the episodes add. The Times column is popular because it publishes well-written stories about love—and not all of them are romantic. Some of them focus, instead, on heartbreak or platonic love. Amazon’s Modern Love is mostly about love with a capital L, although to its credit, it does feature a variety of love stories—not just ones involving young heterosexual couples. Fleabag‘s “Hot Priest” Andrew Scott and Brandon Kyle Goodman play a gay couple looking to adopt a child, and James Saito and Jane Alexander star in another episode about a couple finding love late in life.

The series almost works until the end. The last episode attempts to tie all of the stories together, for no reason at all other than to show the characters pass by each other on the streets of NYC. It’s a cheesy moment that could turn even the most hopeless romantic into a cynic. But if you’re a fan of Love Actually, you might like it.