This is a perfectly harmless, pleasant show for children too young to care about silly things like world history, parenting norms, and logic.

I’m not a parent, but like many of the grown-ups who’ll be watching this new animated series with their little ones, I grew up with Clifford the Big Red Dog. My mom read the Norman Bridwell picture books to me when I was little, and since I have a sister who’s seven years younger than me, I even watched a great deal of Clifford’s 2000-2003 PBS cartoon.

It’s easy to see why Clifford the Big Red Dog is an appealing IP to reboot for the streaming era. There’s a timeless appeal to “what if a little girl lived on an island with a brightly colored dog the size of a house.” Kids love dogs, kids love giant things, and there are few limits to what you could do with such a simple premise.

RELEASE DATE: Dec. 6, 2019
DIRECTOR: Mike Weiss
STREAMING: Amazon Prime
Though it won’t be of much interest to parents, or even older siblings, this new take on the classic picture book series offers charming aesthetics and wholesome fun for preschoolers.

Figuring out how to evaluate this new series has been an interesting challenge, because unlike many other kids’ TV shows, including the early-aughts cartoon (also available to stream on Prime Video) which was aimed more toward elementary-age children, this new show seems utterly uninterested in cross-generation appeal. There’s nothing wrong with that, but for adults (like single, 28-year-old media critics), it’s difficult to connect with.

I haven’t consulted with any preschoolers for this review, but I’d imagine they’d enjoy Clifford. For one, unlike previous iterations of the franchise, Clifford now has the ability to talk and have complete conversations with young Emily Elizabeth. It’s a fun new wrinkle. He still can’t talk to other humans, but that just adds to the childhood wish-fulfillment aspect of the series. Which kids haven’t fantasized about having a secret language with their pets?

Like many other shows for the preschool crowd, there’s a great deal of emphasis on music here, often surprisingly so. Each episode features several original songs sung by the characters, but mercifully, they’re not grating. At best they’re catchy, and at worst they’re inoffensive. More Sesame Street than Barney the Dinosaur, if you will.

The animation style is charming, too. Though never to the point of harshness, there’s an adorable sketchiness to the characters and environments, almost like they’re drawn in crayons and colored pencils by a child. Emily Elizabeth (Hannah Levinson, whose young voice also provides various animal noises throughout the show) and Clifford (Adam Sanders) meet a whale, for example, and there’s not much more to “Mr. Whale” than a simple outline, a solidly bright-blue body, and a :) face in the middle. 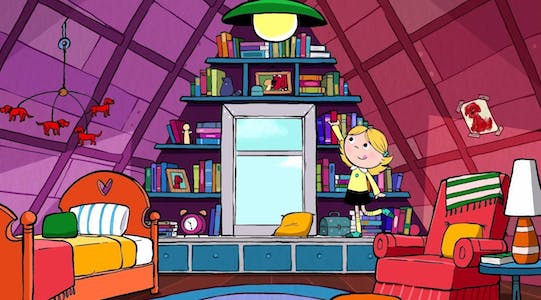 I couldn’t help but notice a number of leaps in plausibility that probably won’t matter a single iota to 4-year-olds, yet baffled me.

Emily Elizabeth and her little friends must be the most well-behaved kids in the universe. It makes perfect sense that a show for this age group would be concerned about exemplifying good behavior. I’m sure many parents would be happy to know Emily Elizabeth slows down the first time an adult tells her not to run on the sidewalk, and that she doesn’t complain when her parents ask her to stop playing with Clifford and come in for dinner.

So why (and I know this is not unusual for kids’ cartoons) is she apparently free to ride through Birdwell Island on Clifford’s back with no adult supervision? Why does nobody seem alarmed when her friends—whom I must emphasize are tiny little boys—sail on a boat by themselves in the ocean? It’s sweet that Clifford and Emily Elizabeth would spend hours at the beach searching for a doggy friend’s lost chew toy, but isn’t it odd that this tiny little girl returned home after sundown, and her parents weren’t even remotely alarmed?

Also, am I the only one who finds it weird that the first episode featured Emily Elizabeth and Clifford learning about pirates in highly dubious fashion, then pretending to be pirates? I’m suddenly more sympathetic to my father’s complaint following our family’s viewing of Pirates of the Caribbean: “That was fun, but I don’t know how I feel about pirates being portrayed like heroes. Pirates were terrible.” I shrugged it off because I was 13, but he was right! Pirates were terrible! 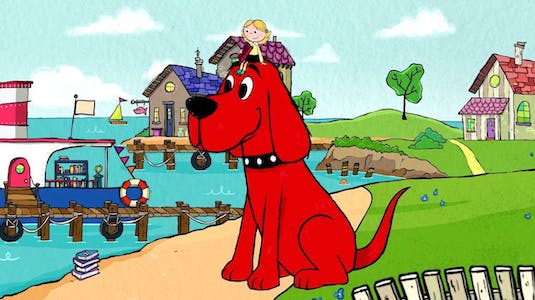 But I’m a grown man thinking too much about how much my parents would’ve freaked out if I rode my big red dog all the way across town by myself when I was 8. Kids will probably eat this stuff up, and hopefully take in the show’s educational elements too. Imagination, delightfully encouraged by Emily Elizabeth’s local librarian, is a major theme, as is kindness, teamwork, and other wholesome values.

This is a perfectly harmless, pleasant show for children too young to care about silly things like world history, parenting norms, and logic. It doesn’t have much to offer viewers over 5 beyond cute animation and nostalgia, but if you’re just looking for something to keep your kid happy for a half hour at a time, you could do a lot worse.