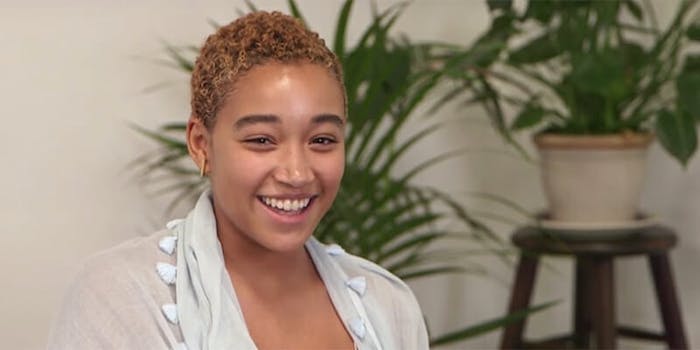 An actress known for her role as Rue in The Hunger Games revealed recently that she turned down a role in Black Panther because she is biracial, and she wanted the part to go to a darker-skinned black woman.

Amandla Stenberg, 19, explained her race consciousness in an interview at the TIFF New Wave Festival in Toronto, Complex reported Thursday. The actress, who last year played Maddy in Everything, Everything, said it was difficult to turn down the role, but she doesn’t regret it.

“One of the most challenging things for me to do was to walk away from Black Panther,” Stenberg said. “I got really, really close and they were like, ‘do you want to continue fighting for this?’ And I was like, ‘This isn’t right.’

“I recognize 100 percent that there are spaces that I should not take up, and when I do take up a space, it’s because I’ve thought really, really critically about it and I’ve consulted people I really trust and it feels right,” she added.

Her thoughtfulness about the roles she plays as a biracial actress takes into consideration colorism in Hollywood, which means that oftentimes roles for Black women in Hollywood go to lighter-skinned actresses.

“These are all dark skin actors playing Africans and I feel like it would have just been off to see me as a biracial American with a Nigerian accent just pretending that I’m the same color as everyone else in the movie,” Stenberg said.

Stenberg didn’t say which Black Panther role she had auditioned for (though she’s close in age to Leticia Wright, who played Shuri, the princess of Wakanda).