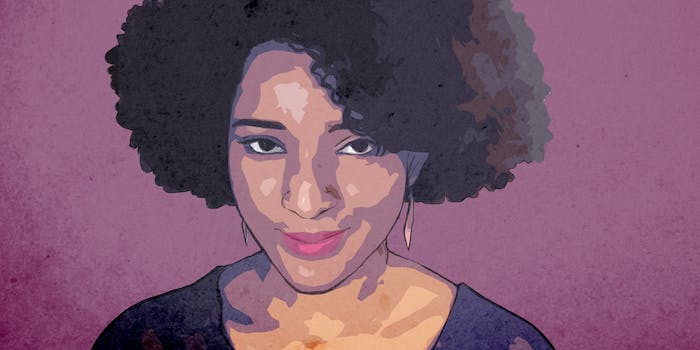 The panel reminded me of Bean’s channel. This year the Root named her one of the 12 best and brightest black creators to attend VidCon. And for good reason.

Since starting her channel in 2013, Bean has transformed her video library from an archive of college photo reels to a space for conversations on social justice, race, natural hair tutorials, black culture, higher education, and creativity. Her first big break came in 2014 when she uploaded the first of her four-part series “How to Get Into Harvard.”

The video not only gained attention for its helpful tips, but inspired Bean’s most viewed video, “I, Too, Am Harvard.” The project is focused on uplifting the stories of black students attending Harvard in order to change the all-white perception of the Ivy League student body. Bean’s audience doubled after she was named a little YouTuber to follow by fellow activist Hannah Witton this year. Just before VidCon, she started a Patreon to help balance her YouTube pursuits with her full-time job as a production assistant for Arthur.

“As an artist, YouTube has given me a place to express myself audiovisually on my own terms, with practically no limitations on the nature of the content or the audience,” Bean tells the Daily Dot. “Whether a video is short and pithy, cute and comedic, or experimental and abstract, it can belong on my channel and reach my audience all the same.”

In 2015, Bean lent her voice to the growing discussion of race and representation on YouTube. In her video response to MeowItsLucy, the originator of the discussion, Bean said: “As a black person, not only is it counterculture to say my voice matters, but in a world that can’t agree black lives matter, much less black stories, simply asserting the validity of my presence could put me at risk. Simply existing as a black person in an all white space can put you at risk.”

But Bean is not backing down from said danger. And neither are thousands of others on the platform. Following these videos and Akilah Hughes’s famous piece “YouTube Rarely Promotes Black Creators Even During Black History Month,” viewers saw an influx in campaigns and conversations surrounding race on YouTube. This year YouTube held its first #YouTubeBlack event and flew 100 of its top black creators to Los Angeles to address racial inequalities on the platform. VidCon held more than 10 different panels specifically addressing the accessibility and representation of minority communities online.

“YouTube is where millions of people are going to look for information and experience, and in that search, it is important that voices of color and minority communities be seen. Having diverse voices on YouTube allows people to broaden their understanding of the human experience beyond their own, to develop empathy, and to dispel ignorance. All of that makes the world a nicer place to live in,” says Bean.

That’s nice and all, but there is still lots of work to be done when it comes to matters of creator equality on YouTube. This makes her work all the more vital to the platform.