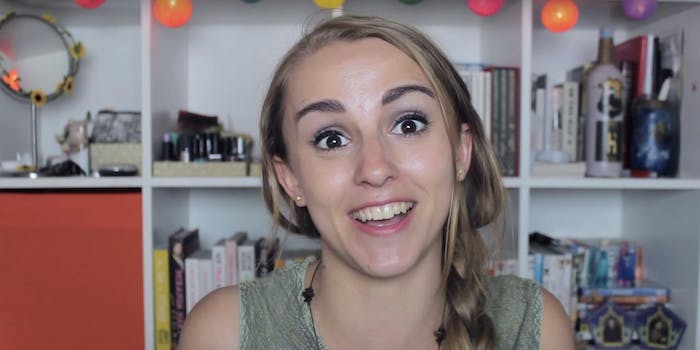 #WCW Hannah Witton is changing the way we talk about sex

This pint-sized creator isn’t afraid to turn a few heads in the name of bettering sex education.

Hannah Witton is one of the top power players in the sex-education community on YouTube—and she’s just getting started.

In 2013, through her work on YouTube, Witton was nominated for the Young Person of the Year at the Sexual Health Awards in partnership with Brook and FPA, and just a year later, she was shortlisted for best vlog by Cosmopolitan magazine.

It’s easy to fall in love with Witton, her enviable confidence and passion for life leaving you both envious and inspired; her channel’s 9.5 million views are testament to that. Her collaborations are always with influential and authentic YouTube talents, including BeckieO, MeowItsLucy, Dodie Clark, Jack Howard, Daniel J. Layton, Akilah Hughes, and Ashley Mardell. This group, and many others, often get pulled into Witton’s sex talks and popular drinking series “Drunk Advice”—a best-loved series by me, my cats, my favorite bartender, and thousands of others around the world. (Her talks with Jack Howard and Daniel J. Layton are extra-special gems.)

A recent graduate from the University of Birmingham, Witton received her degree in history with an emphasis on sexual history, completing her thesis around sexology and sex manuals. In late 2014, Witton made international news with her video “Do I Look Like a Slut?” which confronted the frustrating and highly debated topic of slut-shaming.

Spoiler alert: There is no such thing as a slut.

The video was picked up by Time magazine, Huffington Post, and Mic, and went on to inspire Witton’s TED Talk, “What Internet Trolls Taught Me.” Outside of her own YouTube channel, Witton is the host of Astronauts Wanted’s newest show #Blessed, a place where she has shared many of her most misadventurous stories. She is also an avid blogger, dedicated to answering anonymous fan questions about sex (see her empowering reply here) and writing about her adventures in living fearlessly.

Following Witton is a reminder to live life a little more bravely, boldly, and beautifully—and along the way, if we happen to start conversation about some vital aspect of sexual health, I believe nothing would make her prouder.