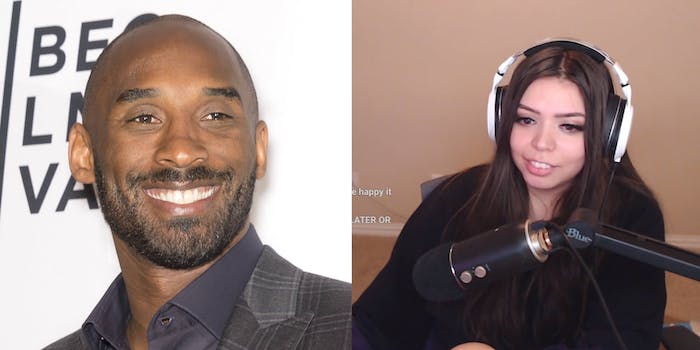 'That man and his daughter's smile were just so big and so bright.'

Following Kobe Bryant’s shocking death in a helicopter crash on Sunday, fans of the basketball star have been struggling to come to terms with his loss. They’ve been spreading stories from his life, sharing clips of his best moments as an athlete, and expressing their grief on social media. Twitch streamer Adept joined in this online sharing session through Twitch’s “Just Chatting” channel this week.

Adept is among the 41-year-old Los Angeles Lakers star’s grieving fans. She’s been publicly mourning his death on her Twitch channel, and she shared the story of how she once met him in person.

“You cannot hesitate,” Adept recalls telling her sister. “You need to get in there, this is our plan and we have to do it.”

Adept noted that her sister, typically timid and unobtrusive, agreed to the “lifetime opportunity.”

“I pretend like I’m walking up first, and the security guard stops me, and my sister goes in behind her,” Adept recounted with a fond smile. “And she goes ‘Kobe can you please sign my shoes? Like, you’re everything.'” According to Adept, Bryant recognized the school her sister went to, having just concluded watching her play. “He goes ‘of course, of course,'” Adept said. After taking the shoes from her sister and signing them, Bryant congratulated her sister on her game. “He’s just nothing but that big, wonderful smile.”

After managing to reach Bryant herself, Adept thanked him for being an inspiration. Despite some of her recollections being foggy, Adept stressed how much Bryant meant to her. “I did say thank you so much for being such an inspiration,” she said. “He just smiled and he just looked at me and he goes ‘thank you so much, thank you.'” Adept remembered Bryant as “calm and chill.”

“That man and his daughter’s smile were just so big and so bright.”