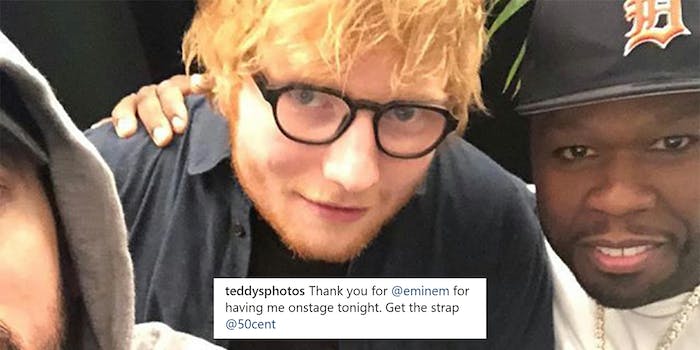 The phrase is blowing up, but it's also gotten 50 in trouble.

The phrase “Get the strap” has now made its way from 50 Cent’s Instagram to a bad selfie with 50, Ed Sheeran, and Eminem.

Earlier this week, Sheeran reposted Eminem’s photo of the three musicians after a show in London. While Em just hashtagged his photo #selfie and took a shot at his #selfie skills, Sheeran signed off on his with “Get the strap.” Taken as slang, it can mean “go get your firearm because it’s time to attack our enemies,” but 50 Cent has given it all sorts of meaning.

What does ‘Get the strap’ mean?

Thank you for @eminem for having me onstage tonight. Get the strap @50cent

50 Cent has been using “Get the strap” as a signoff on his Instagram for a bit now, choosing it to close out recent posts about Wendy Williams and attorney Lisa Bloom. He used it in a tasteless post about Terry Crews as well.

50 Cent used the phrase in a now-deleted post from May about an NYPD officer and was reportedly investigated for posting a threat against an officer. In a statement, a rep for 50 Cent said: “Months ago, Curtis ’50 Cent’ Jackson filed to trademark the phrase ‘Get The Strap,’ a slogan he has been posting across all of his social media platforms. It is posted in connection with photographs and videos, including many featuring just him or things he is promoting.”

The statement concluded: “‘Get The Strap’ is a playful phrase used by Mr. Jackson to punctuate absurd and outrageous situations.”

Last month, Power co-star La La Anthony told Desus & Mero that the phrase originates on an episode of the series when 50 Cent’s character Kanan Starks says it. In an interview with 50 Cent and Power creator Courtney Kemp, he claims that “Get the strap” was actually a line written by her.

But he’s already turned it into a brand. In late June, he announced that he sold the phrase to Bellator, the Viacom-owned mixed martial arts company. He’s also using it to promote his new champagne, Le Chemin du Roi.

This week, the phrase was employed in a homophobic post about Atlanta, which was deleted after fellow rapper 2 Chainz chimed in. He posted a follow-up photo of 2 Chainz that included an “apology” and a hashtag for his champagne.