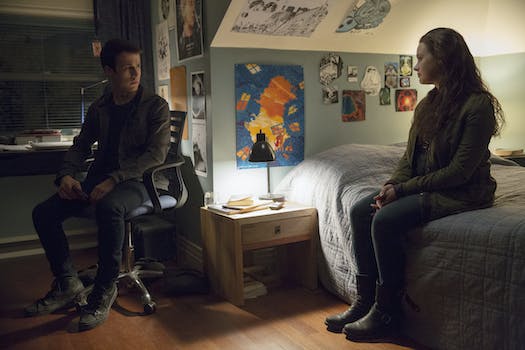 The Netflix series becomes a glossy after-school special that struggles to learn its lesson.

13 Reasons Why was a one-way miniseries: A dead girl leaves behind a box of tapes explaining why she killed herself, each addressed to a different person who contributed to her decision. It was an insatiably binge-ready if not extremely morbid premise. So when Netflix announced that the show would be getting a second season, that was a tough ask for the thin story.

Not that the writers didn’t leave plenty of threads open from season 1 for 13 Reasons Why to pick up with. In season 2, Liberty High and the surrounding community are still reeling from the death of Hannah Baker (Katherine Langford), as well as the attempted suicide of another student. Old wounds are opened again when Hannah’s parents decide not to settle their lawsuit against the school, instead taking it to court and forcing many of the students featured on the tapes to testify. Many start receiving threats, warning what will happen to them if they don’t keep their mouth shut. Meanwhile, Clay Jensen (Dylan Minnette), our erstwhile hero, stumbles into a conspiracy involving old photos which reveals an even deeper history of sexual misconduct at Liberty High. Oh, and he also starts seeing Hannah as a ghost, imagining her everywhere he goes and talking to her when he’s unsure of himself.

Structurally, it makes sense for 13 Reasons Why to use Hannah’s trial as a focal point. Based on a season 1 episode where characters are giving depositions to a camera, you might’ve even guessed this was where the show was going. The use of the polaroids, conversely, makes for a compelling mystery while also feeling like a distraction. It’s like the show, desperate to keep the built-in story engine it had in season 1 churning, doubled down on the puzzle box element.

And then there’s the Hannah of it all. Langford’s presence and performance on 13 Reasons Why is essential to its success. Her control over the narrative subverted the typical beautiful dead girl trope, making her not only the focus of but the driving force in the story.

Yet her presence in season 2 is a cheat. Langford is given plenty of screen time between additional flashbacks, flashbacks we’ve seen before, and her ongoing dialogue with Clay. While 13 Reasons Why needs all of these scenes to make sense of itself, they also chip away at the show’s foundation. The decision to depict Hannah’s suicide in graphic detail in the first season, highly debated as it was, drove home the dead-serious stakes. After viewers spent a season playing detective, coming up with fan theories, and analyzing the many eccentricities of this world (seriously, how do so many of these high school kids have tattoos?), it all came back to death. Whether 13 Reasons Why glamorizes teen suicide or not is still up for debate, but Hannah’s final moments were shockingly real. Here was a character we had grown to love, and then, she was just gone. That’s how death works.

And now she’s back, which is not how death works. Using Hannah as a spirit guide for Clay, essentially stretching out one of the more powerful scenes from season 1 across season 2, makes for a fine plot device but a lousy message.

This is important since 13 Reasons Why is big on messages. While adding a trigger warning, promoting links to crisis information resources, and releasing supplemental materials to help parents and teens navigate difficult discussions, the actual plot of season 2 doubles down on the tricky material. Everything from suicide, to sexual assault, to drug addiction, to school shootings (a topic you also probably could have guessed was coming based on season 1) is covered. Netflix and the show’s creators know these are sensitive subjects, and always try to approach them as such. After the recent school shooting in Santa Fe, Texas, for instance, a premiere party for the release of season 2 was canceled. Everything the show does, it does in theory as a service to its young viewers. It’s become a serialized after-school special, but with better production value.

None of it is ever going to be enough. Just as a series of suicides which followed in the wake of the first season showed, some will always blur the line between reality and fiction. These real-world consequences undermine the creators’ messaging. There’s no doubt that the show has surely inspired some good things too, starting important conversations and maybe even saving some lives. But for every conversation 13 Reasons Why is having with its audience, there’s another it is not.

Consider that for as much time as the series spends on the varying factors that might influence someone to commit suicide, there’s relatively little attention paid to the overall mental state that comes with reaching that point. There had been speculation before the premiere that Clay’s mental health would play a bigger role in season 2, which makes sense, considering he literally spends the whole season talking to someone who isn’t there. But what about Hannah’s mental health? Depression cannot be solved like a puzzle.

It would be unfair to ask 13 Reasons Why season 2 to tackle the many nuances that come with these issues, yet it’s so intent on doing just that. The second season’s great failing is that it wants to have its cake and eat it too. The things that work about the show—the music, performances, how well-made it is—are all still there. But as 13 Reasons Why continues to position itself as a work of advocacy, it also can’t get past the mystery elements which enticed viewers to watch it in the first place.

The new episodes are watchable, but both the story and the message end up suffering as they jostle for airtime, and it’s hard to fully recommend something when its very existence undermines its power.